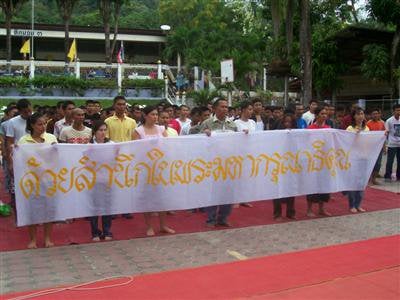 Also released from Baan Bang Jo detention center were two women and two men who had been detained there instead of paying fines.

The royal decree was issued on December 9 to give certain prisoners the chance to start a new life and re-enter society. The prisoners released included low-risk convicts who had one to two years left to serve, seriously ill prisoners, females imprisoned for the first time who had served not less than half their sentence as well as aging and handicapped prisoners.

Buddhist monks presided over the release ceremony, during which the ex-convicts pledged to lead crime-free lives from now on.

Of the roughly 1,100 prisoners detained in Phuket Provincial Prison, 46% are serving sentences for drug-related offenses, 22.6% for vandalism, theft and burglary, 12.5% for violence and 4.5% are sex offenders.