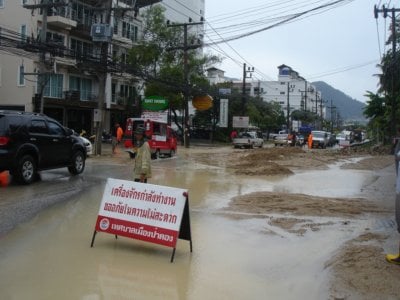 PHUKET: Many hillside areas of Phuket are at serious risk of landslides this rainy season, the Phuket Office of Disaster Prevention and Mitigation (DDPM-Phuket) has warned.

DDPM-Phuket chief San Jantharawong said that torrential rainfall can hit at any time during the monsoon, which typically runs from May though October.

“Although Phuket has not seen the kind of very bad landslides experienced by some other provinces, it is always better to be prepared. Government organizations must take the lead,” he said.

Mr San declined to comment when asked which parts of the island were deemed at greatest risk, saying he did not want to harm the reputation of all developers in those areas.

To prepare for the worst, DDPM-Phuket will hold landslide and flood emergency preparedness exercises along flood- and landslide-prone sections of Sirirat Road in Patong on June 28 and 29.

Announcing the date of the drills at a meeting at Phuket Provincial Hall on June 1, Phuket Vice Governor Tri Augkaradacha said, “Many of the problems here, like flooding or drought, can be solved, but the biggest risk is landslides and that is why we decided to conduct the training.”

V/Gov Tri accepted that a proliferation of hillside real estate projects on the island was responsible for the increased risk of landslides.

Objectives of the drills include shoring up tourist confidence in Phuket’s ability to deal with a landslide, testing equipment to make sure it is in good working order, and ensuring that emergency response teams know how to respond in the event of a disaster, he said.

In addition to DDPM-Phuket, Patong Municipality, the Phuket Public Health Office and other agencies will take part.

Aongart Chanachanmongkol, chief of the Phuket Provincial Office of the Ministry of Natural Resources and Environment (MNRE), said, “Under current regulations we must allow developers to expose land surfaces, but only in compliance with our erosion control measures. In places where villagers develop their own hillside land without the MNRE controls, the chance of landslides is greater.”

“Phuket faces risk in all hillside areas, but the most dangerous spots are in Karon, Patong and Kamala,” he said.

Minor landslides have been common in Phuket in recent years.

The last fatal slide came in July 2008 when heavy rains caused a landslide that buried three Burmese laborers alive in a labor camp in a hilly area of Patong.

The worst flooding in the South came in 1988, when 358 people were killed and over 55,000 homes destroyed in regional flooding and landslides.

Most of the deaths and damages were in the provinces of Surat Thani and neighboring Nakhon Sri Thammarat, where an unprecedented 735mm of rain fell in just two days.

Land use changes, including a rapid increase in rubber farming, were found to be among the major factors responsible for the disaster, according to government reports.