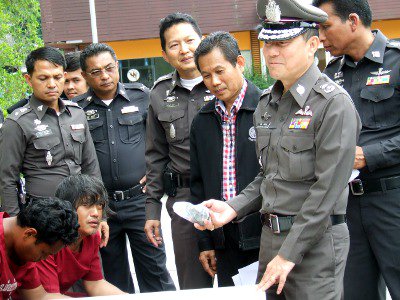 PHUKET: Complaints to police about “suspicious youngsters” in a housing estate in Wichit sparked three days of raids that led to 13 arrests and netted seven stolen motorbikes, heroin and other drugs – and a defunct grenade.

The raids followed tip-offs from residents at Irawadee Village who complained about youngsters constantly riding motorbikes without license plates through the estate, located off Sakdidet Road in Wichit.

Responding to the complaints, officers arrested a juvenile, named only as “A”, riding a motorbike without a license plate through the estate.

The motorbike was previously reported stolen from nearby Soi Nakkarat.

The boy confessed he stole motorbikes with three other youngsters, who police later arrested.

Further investigations led to subsequent raids and the arrests of the nine other men.

During the raids, police seized a hoard of illegal items, including heroin, ya bah (methamphetamine), ya Ice (crystal methamphetamine) and seven stolen motorbikes.

Ten men arrested in the raids were put on display at a press conference at Phuket City Police Station today. The three juveniles were not present.

One of the items seized, an M67 grenade, piqued the interest of Phuket Provincial Police Commander Pekad Tantipong.

The grenade was seized in a house on Prachasamakkee Road in Rassada, where Somchai Thirawiriyaporn was arrested.

Somchai assured Col Pekad that the grenade was safe.

The explosive had been removed and he kept it only for fun, he said.