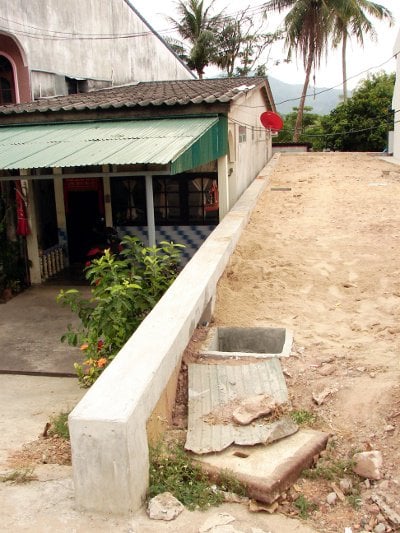 Mayor Pian handed over the cheque to Kathu Police Superintendent Col Arayapan Pukbuakhao at a ceremony at Patong Municipality offices this morning.

The money was garnered from rental fees levied on fair operators for staging a fair at Loma Park, starting on Valentine’s Day, said Mayor Pian.

Col Arayapan explained that construction of the 10 row houses, to be used by Kathu Police, began three months ago under the command of former Kathu Police Superintendent Col Grissak Songmoonnark.

Col Grissak applied to Royal Thai Police headquarters for 3.4 million baht to build the 10 row houses. That budget was approved after Col Grissak was transferred to Kuraburi, in Phang Nga, early last year.

Col Grissak also asked for 500,000 baht to be donated from the private sector for filling soil to elevate the site as the existing level was two meters below the level of the road.

That money arrived and the soil was laid before Col Grissak was transferred.

That dirt has since sparked complaints from soon-to-be-neighbors of the police as it runs off the construction site, a plot of government land opposite Wat Kathu, and into their homes every time heavy rain falls, Col Arayapan explained.

Construction of the 10 row houses is nearly complete, as is one of the two retaining walls, he added.