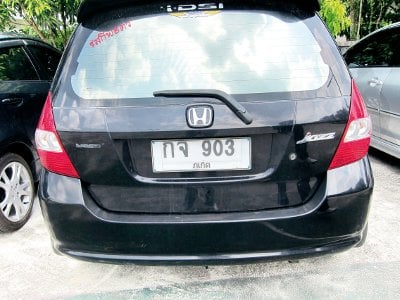 PHUKET: An investigation by Phuket Police has led to the recovery of 17 stolen cars from a warehouse in Nakhon Sri Thammarat, including several from car rental agencies based in Phuket.

The owners had rented out the two cars to women identifying themselves as Sukanya Janthanarak, 40, and Supaluck Krutmanee, 44. The women left Thai ID cards before driving off with the vehicles, one a Toyota Fortuner for one month for 70,000 baht.

The complaints were filed after the return date passed and the agencies were unable to contact the women by phone.

A third victim, Pitak Chansatien, filed a similar complaint shortly thereafter when three vehicles were not returned to his agency in Kata.

“Sukanya and Supaluck came to my shop to rent a car for three days. When the due date arrived, they called and said they wanted to extend the rental period and transferred money. They appeared to be quite honest, so I believed them,” he said.

“Not long after they rented the first car, they came back and rented two more for foreign boyfriends. In all, they rented two Honda City cars and one Toyota Vios from me,” he said.

All three cars were rented out for one month, with scheduled return dates in mid-March.

When the vehicles were not returned, he also reported the thefts to Lt Col Boonlert.

Fortunately, Mr Boonying’s Vios had a GPS transmitter, which allowed police to locate it in a rubber plantation in the Phromkiri District of Nakhon Sri Thammarat.

“Behind his house is a big warehouse, where all of the cars were kept. Our investigation revealed the warehouse was a pawn shop for cars. If any person failed to claim back their vehicle, he sold it off to dealers,” explained Maj Gen Werasak.

The cars were from many provinces across the South, and as far north as Bangkok, including “six or seven” from Phuket. Police seized all 17 vehicles pending investigation.

Ten of the cars were deposited there by Sukanya and Supaluck, the investigators found.

Mr Thanatat claimed to know nothing about his best customers and said he ran a legitimate business, said Maj Gen Werasak.

“The duo are still at large. We found out that they changed their names more than 20 times, in many different provinces. They gave their identification cards to the agencies, then applied for new ones under new names,” he added.

“We hope we can find them soon,” he said.

After learning that stolen cars were recovered from the warehouse, Mr Pitak traveled to Phromkiri Police Station in the hope that all three vehicles would be there.

“I found only two of my cars. I think the third may have been sold already,” he said.