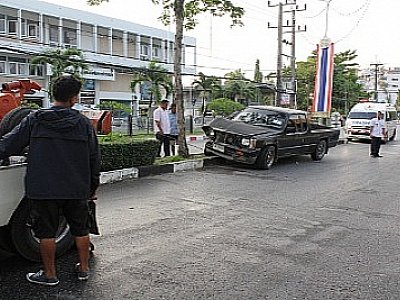 PHUKET: A man driving from Saphan Hin toward Phuket Town this morning crashed his pickup truck into a tree in front of the Phuket Marine Police Station.

Phuket City Police were informed of the accident at 6:39am and quickly dispatched officers along with members of the Phuket Kusoldharm Rescue Foundation.

Arriving at the scene, they found a Krabi-registered Mitsubishi pickup truck stopped on the median strip along Phuket Road, with damage to the driver’s side .

“I asked the driver, who asked to remain anonymous, about the accident and he told me that as he was nearing the Marine Police Station he dropped a roll of tape on the left side of the steering wheel,” said Pol Lt Ekkachai Siri.

“He bent down to pick it up. By the time he sat back up, it was too late to avoid the tree,” he said.

“He was not injured,” Lt Ekkachai added.