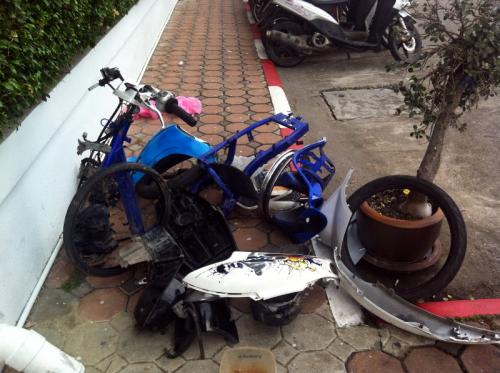 The teenagers were caught in possession of nine stolen bikes in good condition and one that had been dismantled, said Phuket City Police Deputy Superintendent Prawit Engchuan.

The teenagers’ activities came to police attention on July 2 when a Mattayom 2 student at Baan Thungka School in Rassada reported his Yamaha Mio stolen from in front of the school.

Police assigned a team to look for them, and on July 13 a Phuket City policeman spotted a teen riding a motorbike that matched the description of the stolen bike and had the same license plates.

When stopped and questioned by the police, the teen, a 16-year-old given the pseudonym “A” by police, confessed to the theft and led them to the home of 18-year-old Narin Klongyuth, in Thalang.

Mr Narin and another youth – a 17-year-old given the pseudonym “B” – were found at the house with eight motorbikes in good condition and one in pieces.

“From the preliminary investigation, we found that they had been stealing bikes and selling the parts for money to hang out,” Lt Col Prawit said.

The three teenagers have been charged with theft and receiving stolen property, he said.

Bullets, but no guns: Phuket man charged for illegal possession