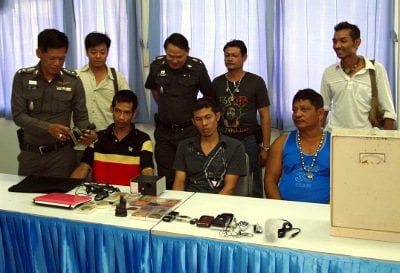 PHUKET: An investigation into a spate of robberies in northern Phuket has led to three arrests, but police believe the break-and-enter gang’s ringleader is still at large.

Lt Col Weerayut Sittirattanakul explained that since the beginning of the month Thalang Police had received numerous reports of people’s homes being robbed.

“Our investigation led us to a house in Tambon Thepkrasattri, where Subandit was living,” he said.

Inside the house, officers found a strong box, a variety of amulets and an MP3 player, all reported as stolen, said Col Witun.

During questioning, Subandit told police he had received all the seized items from a man he named only as “Dam”.

“Subandit also said he sold one stolen computer to Kittisak for 2,500 baht, and Somyot was arrested because Sunbandit said that Dam had left some items at his house. Somyot is Dam’s relative,” Lt Col Weerayut said.

Col Witun explained that officers seized a Samsung computer from Kittisak’s house and seized one cell phone and one video camera from Somyot’s house.

He urged all residents in Thalang to report any suspicious behavior of strangers lurking around homes.

“If you see any people hanging around suspiciously, please report it to the police,” he said.

Lt Col Weerayut added that Dam is experienced in break-and-enters.

“During our investigation we found that Dam has already served a prison sentence on charges of being a ‘sneak thief’. He was released just a month ago,” he said.