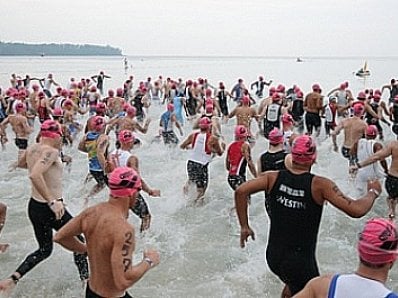 PHUKET: Over 1,000 competitors are descending on the island for the 18th Laguna Phuket Triathlon (LPT) which officially begins today with race registration and a press conference at the Dust Thani Laguna Phuket.

Registration numbers have smashed all previous records from the 17 year history of this prestigious Southeast Asian athletic event.

Master of ceremonies Whit Raymond will introduce several guest speakers at 1:30pm today at Dusit Hall to honor the opening of the LPT.

Following the speakers, several high profile triathletes competing in this year’s race will be given a detailed introduction. Defending men’s and women’s champions Massimo Cigana and Belinda Granger, respectively, will field questions from the media, as will Jaray Jearanai who is the first Thai athlete to compete in both the Ironman 70.3 and Ford Ironman World Championships.

Our own Tri Tim, whose road to prepare for the LPT has been monitored by Phuket Gazette readers, will also join the panel for pre-race insights into tactics and emotions.

Once the press conference has concluded, the Laguna Phuket Survival Swim Program (LPSSP) will be officially launched.

LPSSP will endeavor to teach more than 2,600 children from local schools in Thalang the benefits of competence in the water, and will be held on beaches, municipality pools and at Thanyapura Sports and Leisure Club.

An estimated 600,000 baht is required to implement the training program and athletes participating in the LPT are individually raising money.

This evening, every athlete will attend race briefings given in different languages to accommodate the vast range of international competitors, and will be followed by the traditional “Pasta Party” – the last big meal for athletes before the race starts.

Tomorrow morning at 6.30 the starter’s gun will be fired and the first wave of athletes will surge into the water off Laguna Beach Resort near the Marine Center.

At 7:30am the Fun Run begins and by 9am the first finisher is due to cross the finish line.

Organizers expect the last competitors home by 1pm. They will then have four hours to gather themselves for a cocktail party, the awards ceremony and a banquet due to carry on late into the evening, or at least until the adrenaline and drinks stops flowing.

The Phuket Gazette and PGTV are sponsors of the Laguna Phuket Triathlon and wish all participants the very best for tomorrow’s race.

Police confirm handover of 95 Rohingya near Phuket to Thai Army