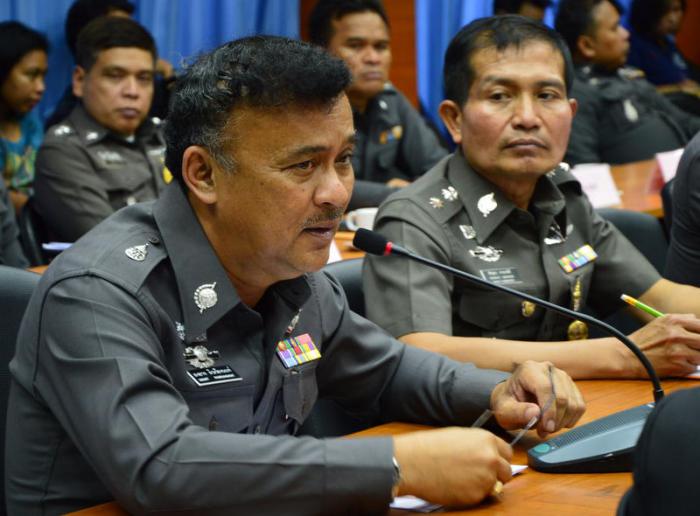 PHUKET: Police have identified the two Caucasian men who were seen with “missing” Russian woman Iana Strizheus, found injured and in shock in a hotel room on Sunday.

“We are searching for the two men, who work in Phuket. At this time, we can’t reveal their names without jeopardizing the case,” Phuket’s top cop Ong-art Phiwruangnont said at a press conference last night.

Maj Gen Ong-art revealed that money problems were at the root of the case, but said it was not yet clear whether the events that transpired were a true kidnapping or a hoax to extort money (story here).

“Ms Strizheus, who is still in the hospital, has talked with us, but she’s only telling 50 per cent of what she knows,” Maj Gen Ong-art said.

Ms Strizheus and her boyfriend, 39-year-old Alexey Slabinskiy, entered Phuket on student visas, but were allegedly working in the real estate business.

The couple was last reported seen on March 7.

March 7: Relatives of Mr Slabinskiy, in Russia, receive a call from the couple alleging that they were kidnapped. Relatives are asked to send US$100,000. No money is transferred.

March 8: Ms Strizheus checks into the Bang Tao Village Resort at 8:30pm, accompanied by the two suspects currently being sought by police.

Noon: Ms Strizheus calls her younger sister in Russia, says that her hands and feet are tied up and she needs help.

Sister posts a frantic message online detailing the call and asking for help.

4:10pm Ms Strizheus checks out of the hotel alone, but is immediately picked up by the two suspects.

5pm: Ms Strizheus calls her sister again and says that she is “free and safe” and going to see a friend in Cherng Talay. Relatives and police then discover that Ms Strizheus’ telephone has been turned off.

March 14: At about midnight, Ms Strizheus checks into the Blue Garden Resort and Spa in Cherng Talay with the two men. One suspect seen leaving the hotel by staff.

March 16: A hotel employee visits Ms Strizheus’ room to ask her to pay. Staffer finds Ms Strizheus on her bed in shock and badly injured.

Ms Strizheus is taken to Bangkok Hospital Phuket and later transferred to Vachira Phuket Hospital, where Gen Ong-art ordered a 24-hour police guard outside her room.

March 18: Police continue their search for the two suspects, as well as Mr Slabinskiy.