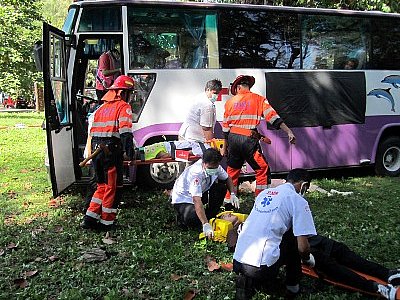 The exercises were part of the first-ever International Medical Rally in Asia, which brought together for a one-day event four DMATs from Thailand and three DMAT crews from Japan, Korea and Sri Lanka.

The event was set up to allow each team 20 minutes at 10 stations.

At seven of the stations the rescue teams responded to simulated emergency situations, including one scenario Phuket is very familiar with – a bus crash.

“This is not a serious competition. It is a friendly competition for our four countries,” said Wiwat Seetamanotch, deputy chief of the Phuket Provincial Health Office, which organized the event.

DMATs from Central Thailand were unable to join the competition due to the recent flooding, he explained.

“They [DMAT from central Thailand] said the teams really wouldn’t be ready [for the competition], and that they still had to take care of their own area,” said Dr Wiwat.

The Phuket DMAT did not compete, due to the fact that they were hosting the event and would already know what the emergency simulations would be, he added.

Among the adjudicators overseeing the rescue drills was Chatchai Thaikla, Adviser to the National Safety Council of Thailand and Director of the national Thai Fire & Rescue Training Academy.

“This event is one of the best practices in Thailand. Today, I helped as a safety instructor for the incident command system [station] as well as the marine and river safety [station],” he told the Phuket Gazette.

Tatsuro Kai, Vice President of the Osaka Saiseikai Senri Hospital in Japan and Director of the Senri Critical Medical Center, arrived to take part in the event in a seven-man team.

“Four of us are doctors, two are paramedic specialists, and one is a logistics specialist. This is my third time joining the DMAT training in Phuket. I received an invitation from Dr Wiwat three years ago to be a DMAT instructor. I have come here every year since,” he said.

“Today was a very successful day. Every one did a good job. If Dr Wiwat invites me back again next year, I would be very glad to come,” Mr Kai smiled.