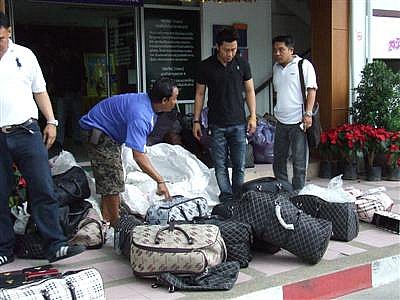 PHUKET: Five people were arrested on Tuesday for selling counterfeit handbags in Patong, but at least one of them swore she would be right back in business after paying a fine.

Patong police and representatives of high-end handbag companies led the raid on five shop operators, all working inside the tourist-oriented Sainamyen Plaza on Rat-U-Thit 200 Pee Road.

The value of the seized items was estimated at 400,000 baht.

Phubet Mingkuan, a representative of Chanel SARL Co along for the raid, told the Phuket Gazette, “The [pirated] bags are worth about 400,000 baht. If they were the ‘real thing’ the value of the seizure would be over 10 million baht, because the retail cost of the items they were copied from can run as high as 100,000 baht each.”

One of the arrested operators told the Gazette, “I’ve been in this business for about three years. We buy the bags from Bangkok for about 700 to 800 baht each and sell them for more than 1,000 baht.”

“Since I started this business, I’ve been caught five or six times – each case takes about two or three months and I’m fined 2,000 baht.”

This operator also said that business goes on, even if all the bags in the shop are seized.

“New bags will be ordered and we will sell them in the shop again,” the operator said.

All five shop owners posted bail of 10,000 baht each on Tuesday night.

Raids on vendors selling pirated goods in Patong have lost credibility over the years, with most observers seeing them as little more than PR stunts or performance art.

Enforcement of the law is selective and there have never been reports of a concerted effort to eradicate the industry en toto from the streets. Indeed, most shoppers, industry practitioners, tourists and other beneficiaries would prefer to see the trade continue to flourish as it does today.