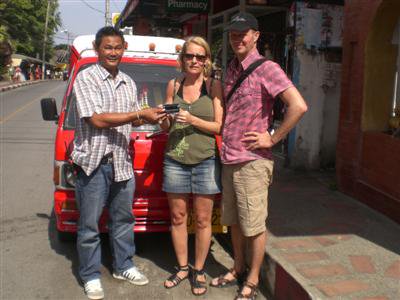 PHUKET: A Phuket tuk-tuk driver tracked down a Swedish couple who left their camcorder in his vehicle on Christmas Day and returned it to them free of charge on Boxing Day.

Cathanna, 48, and her husband hired Thongchai Permpoon to take them on a five-hour tour of Phuket Town.

After dropping the Swedes off at their hotel, the Diamond Cottage Resort and Spa, Mr Thongchai went back to the taxi rank there and stayed there until 11pm before driving home.

As he was cleaning out the vehicle he noticed that a Sony camcorder had been left on the back seat.

The following day he contacted the management at the Diamond Cottage, who were able to help him reunite the Scandinavians with their Handycam.

More than happy to get the expensive device back, the Swedes thanked and lavished praise on Mr Thongchai.

Phuket police get in the holiday spirit – of saving lives