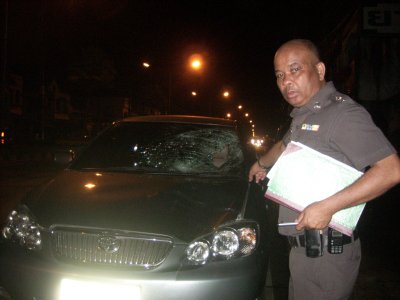 PHUKET: A Phuket woman was struck by a car and killed yesterday, moments before embarking on a merit-making tour to a temple in Ranong Province.

At the scene police found Somboon Keawprasert, 60, face down in the road. About 150 meters away was a Toyota sedan with damage to the front end and a shattered windshield.

The driver of the Toyota presented himself to Thalang Police for questioning.

Mrs Somboon and a friend were waiting for a tour bus to take them to Ranong for a merit-making ceremony in Ranong, a province north of Phuket bordering Burma. Mrs Somboon was struck by the car as she attempted to cross the road to board the bus, which had stopped on the side of the northbound lanes, police said.