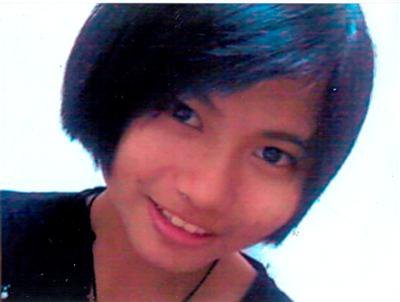 PHUKET: The parents of a 14-year-old Phuket girl who ran off with her young boyfriend are asking the public for help in securing her safe return.

Jintana Wangnurat and her English husband Huwy Williams came to the offices of the Phuket Gazette this morning with a picture of their daughter Grissana “Green” Wangnurat, age 14.

Mr Williams, a nine-year Phuket resident originally from Gloucestershire, said Green ran off with her 16-year-old Thai boyfriend two days ago and has not been seen since.

He expects the boy has taken her to Patong, where she used to be enrolled as a student at Wat Suwankiriwong School.

The family moved from Patong to the Sermsup 3 housing estate off Chao Fa West Road in Wichit about two months ago, he explained.

“We were sick of Patong,” he said.

He described Green as a bubbly, artistic and outgoing girl until a few months ago, when her grades began to plummet and she became increasingly moody, spending inordinate amounts of time on her mobile phone.

He attributed the change in his stepdaughter’s behavior as normal given the onset of adolescence, but the couple are nevertheless desperate for her safe return.

Phuket City Police have already been informed of Green’s disappearance and are investigating, they said.

“We want her back as soon as possible so we can know she is safe and she can continue her studies,” said Mrs Jintana, who is a native of Phang Nga.