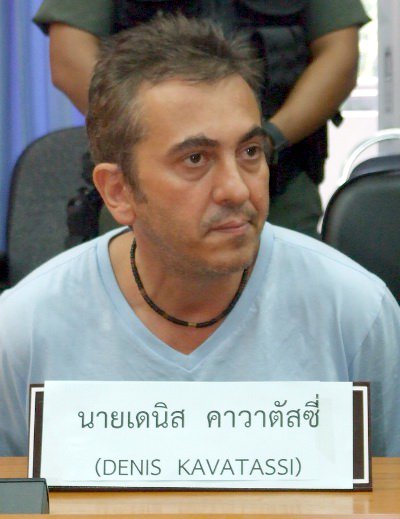 PHUKET: Police have arrested the alleged Italian “mastermind” and three others in connection with the shooting murder of resort owner Luciano Butti, 61.

Mr Butti, also Italian, was gunned down while riding a rented motorbike in Pa Khlok on Tuesday night.

The alleged trigger man, Suchart Nimla-or, and his younger brother, Ekkachai, along with Ponwat Jongrak all remain at large.

Police are now searching for the trio for arrest in connection with the murder.

Kavatassi was a partner with Mr Butti in several business ventures on Phi Phi Don, including Italiano Restaurant and Bar and Ciao Bella restaurant.

The arrests came after police discovered that the last phone call made to Mr Butti before he was murdered came from Somprasong, who was a manager at one of Butti’s restaurants on Phi Phi.

Somprasong caved in to pressure after being brought in to Thalang Police Station for questioning and confessed that Mr Kavatassi had paid him to hire a “hit squad” to take out Mr Butti, Lt Gen Kokiet said.

Mr Butti had cheated Kavatassi out of “seven or eight million baht”, which angered him, Somprasong told police.

Somprasong phoned Mr Butti on Tuesday and invited him to a meeting at a restaurant in Pa Khlok.

He lured him to the secluded area by telling him that he wanted to discuss the business problems between the two Italians and that he sided with Mr Butti and would help him in the matter, police said.

Mr Butti was in Phuket for a brief stay and was scheduled to appear in court in a divorce case on Wednesday.

After meeting at the restaurant, Mr Butti drove his motorbike back toward Phuket Town as the hitmen assembled and followed the Italian.

Somprasong, driving a white sedan, identified the “mark” to Ratchanon and Ponwat on one motocycle, Somchai on another, and Suchart and Ekkachai on yet another.

It was initially reported that the trigger-man was a “civil servant” based in Yala, in Thailand’s troubled Deep South region.

Three of the four arrested have confessed to their involvement.

Kavatassi is maintaining his innocence.