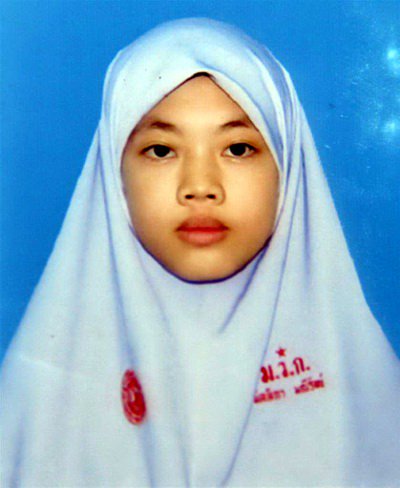 PHUKET: Distressed parents are appealing for any information that may help locate their missing teenage daughter, Mullika “Nong Fah” Suansan, who disappeared from her Phuket school last Friday morning.

Security-camera footage at Muslim Wittaya Phuket School in Koh Kaew, north of Phuket Town, shows 15-year-old Mullika arriving at the school on the school bus, but she failed to show up for classes and hasn’t been seen since.

Parents Somsak and Nuengruthai Suansan, who live in Patong, filed a missing person report at Phuket City Police Station the following day. This week they appealed to the Phuket press for help.

“Every morning my wife took her by motorbike to Patong Mosque, where she boarded the school bus at 6:30am. Every evening, she took the bus back to the mosque, where my wife picked her up at 5:30pm,” said Mullika’s father Mr Somsak.

“Last Friday [June 8] she went to school on the bus as usual, but at 9am a teacher called us and said she did not show up for her first class,” he said.

“I checked the school security-camera footage and I saw her walking into the school, but then she disappeared from view behind a pillar. She hasn’t been seen since.

“Now we don’t know where she is. My wife and I are very worried about her,” said Mr Somsak.

“She is my only child. I fear she might have been kidnapped or tricked by a stranger,” he added.

“She never slept over anywhere else. When she came home, she usually did her homework and read her books. She never left the house except when going with us,” he added.