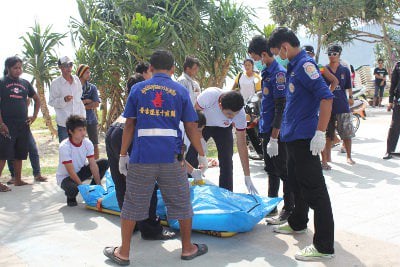 PHUKET: Phuket Police will ask the Central Institute of Forensic Science in Bangkok to conduct DNA tests to confirm that the body recovered off Patong Beach yesterday afternoon is that of missing American student Joshua Shane.

The institute is headed by the well-known Pornthip Rojanasunand, who spearheaded the huge task of identifying victims of the 2004 tsunami.

“Although people close to Mr Shane have already positively identified the body as his, the only way we can release it without the relatives travelling to Thailand is by conducting DNA tests and comparing the results with samples provided by relatives,” Capt Jirasak Boonsang of the Patong Police told the Phuket Gazette.

Mr Shane’s body was first spotted by an Australian tourist riding a rented jet-ski about 300 meters off the north end of Patong Beach.

The tourist reported the dreadful discovery to a jet-ski operator and a lifeguard, who together went into the surf and recovered the body.

The location where Mr Shane’s body was found was only about 200 meters north from where he disappeared while swimming on Tuesday night.