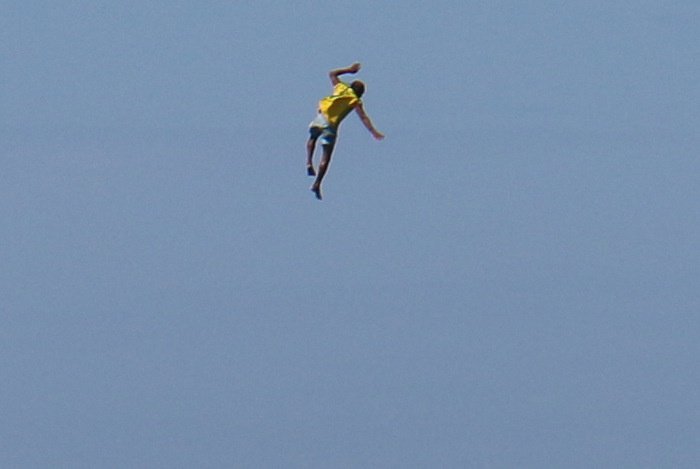 PHUKET: Governor Nisit Jansomwong has vowed to order the Phuket Marine Office to investigate a parasailing accident that saw a staffer free fall from a parachute off Bang Tao Beach on New Year’s Eve.

After losing his grip on the parachute ropes, he plunged about 30 meters into the water below.

“I will have the Phuket Marine Office look into what happened and have them find ways to prevent such accidents in the future,” Governor Nisit told the Phuket Gazette this week.

“We might ask operators to have more staff to look after the safety of both the customers and their own employees.”

An eye-witness to the dangerous plunge reported that he saw the employee get into difficulty soon after the parasail lifted off from the beach.

“After the man struggled in the air for a while, the tow boat driver realized that there were problems and stopped – causing the employee to plunge into the sea,” the witness said.

The boat driver then reversed the speedboat, which led to the parachute ropes becoming tangled around the boat’s propellers, he added.

Meanwhile, the wind had filled the parachute, leaving the tourist at its mercy without an experienced guide.

“The staffer was helped back onto the tow boat and brought to shore on a stretcher, and most likely sent to a hospital,” said the witness.

The tourist was brought down safely without incident.

Governor Nisit told the Gazette that he had not even been made aware of the accident.

Phuket Marine chief Phuriphat Theerakulpisut, however, confirmed that he knew about it.

“The Phuket Marine Office has safety measures [for parasail operators]. However, I don’t have specific details about the accident, so I refuse to give any further information,” he said.

“Accidents occur every day. It was only an accident, which luckily didn’t affect any tourists.”

Just four weeks ago, Russian tourist Sergey Kuzennyy, 55, had his left leg slashed open by the blades of a speeding parasailing tow boat’s propeller while he was swimming off Kata Noi Beach on December 10 (story here).

Mr Kuzennyy and the speedboat owner agreed compensation outside of the legal system and no charges were brought against the speedboat operator, confirmed Lt Col Ason Jiraksa of the Karon Police.

In August, a parasailing operator at Patong Beach lost his grip on the parachute ropes and tumbled from the sky, breaking his arm as he slammed into the sand below (story here).

That incident prompted a call by authorities for people to be “more careful” (story here).

Speaking about the free-fall plunge at Bang Tao on December 31, Ma-ann Samran, the well known president of the Cherng Talay Tambon Administration Organization (OrBorTor), said that the affair was out of his hands.

“Water activities such as parasailing, speed boating, banana boating, snorkelling and so on, are all the responsibility of the the Phuket Marine Office. Our responsibility extends only across the beach, not into the sea,” Mr Ma-ann said.

However, he confirmed that he was aware of the accident.

“I heard that the man is already out of hospital. Luckily, he did not suffer any serious injuries,” Mr Ma-ann observed.