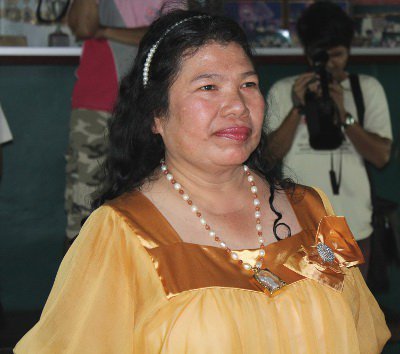 PHUKET: The mother of Phuket badminton star Maneepong Jongjit had words of encouragement for her son after his quarterfinal-round exit from the Men’s Doubles competition at the London Olympics 2012 yesterday.

Pranee Jongjit was among more than 1,000 people who gathered at a hall in Saphan Hin at 3pm yesterday to watch Maneepong and his partner Bodin Isara of Bangkok take on the more experienced Malaysian pairing of Kien Keat Koo and Boon Heong Tan.

All eyes were glued to the large screen set up in the hall, which was packed with excited supporters.

Unfortunately the 21-year-old Thais got off to disastrous starts in both games and went down in straight sets, 16-21, 18-21.

After the match Mrs Pranee said, “I have no regrets about my son losing today’s match because he did his best. It’s important that he made a name for Thailand and Phuket, and I am glad that he was chosen to represent his country…I would like to thank all the Thais who gathered to cheer on the Thai National Badminton Team. I would also like to tell my son, ‘don’t be sad that you lost today because you are still young and will have many more chances to represent your country’.”

Maneepong started playing badminton at the age of six and continually improved thanks to strong support from his family. Among his accomplishments with his partner Bodin are championship titles in the World University Games, World Youth Games and many more.

He lists winning the 2012 India Open, their first World Super Series title, as the pair’s greatest accomplishment to date.