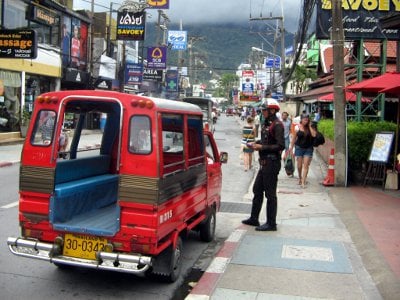 PHUKET: Pessimism reigns over a plan by the Royal Thai Police to set up a “Safety Zone” in Patong, with more than four-fifths of people taking part in a recent Phuket Gazette online poll thinking the initiative would have “little or no effect”.

Readers were asked: Deputy National Police Gen Pansiri Prapawat recently announced a bold “Safety Zone” plan for Patong under which strict law enforcement would help reduce tourist complaints related to tuk-tuks, jet-skis and personal safety issues. What do you think will be the effect of this in the long-term?

Overall, 86.3% of readers thought the initiative would have “little or no effect”.

There was little variation by demographic group, except that those identifying themselves as Thais were more likely to think the plan would have a positive impact.

Those identifying themselves as “local foreign residents” were the most pessimistic, with 91% thinking the initiative would have little or no effect.

To vote in the new poll on the trend in real estate prices in Phuket, click here.

For the latest update on efforts to register illegal taxis and jet-skis, click here.

To comment further on this topic leave a message in the readers’ forum below. The Phuket Gazette welcomes all comments that comply with our “house rules”.