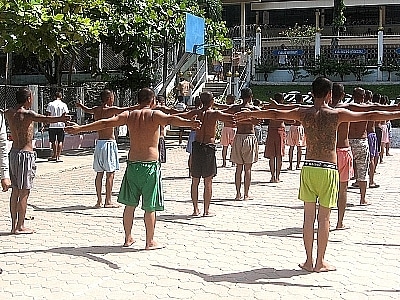 PHUKET: The gates of Phuket Provincial Prison will be open on August 15 and 16 to enable mothers to hug their children inside the facility in honor of HM Queen Sirikit’s 80th birthday on August 12.

In addition to a little family love, mothers over the age of 50 will get some Mother’s Day pampering with free massages to be provided by inmates serving a sentence of one year or less.

“This is the first year that we’ve had the ‘Sai Yai Rak’ [Loving Relationships] project, which allows mothers and children to have enough time to talk about their feelings and hug in the prison,” Phuket Prison chief Rapin Nichanon told the Phuket Gazette.

“The project is an initiative of Corrections Department Director General Suchart Wong-anantachai, and is intended to show the people that we are not abandoning inmates.

“We want to support them so they will be good when they are released,” he said.

Chief Rapin did clarify that only inmates who had not exhibited dangerous behavior would be allowed to spend the two hours with their mother or children.

“Mums and their children will have an opportunity to hug, as well as apologize for any mistakes that they have made,” Chief Rapin explained.

Postcards were sent from the Corrections Department and handed over to inmates so that they could invite their mother or child to visit the prison. About 200 inmates applied to join the event, which is broken into a morning session, from 9am to 11am, and an afternoon session from 1pm to 3pm, explained Chief Rapin.

In addition to offering an opportunity for quality family time, the prison is running a month-long program called “Massage for Mother”, where trained inmates are providing body and foot massages to mothers who are 50 years old or older, at the prison’s massage shop. All mothers are welcome and need only to bring an ID card to verify their age. The shop is open from 8am to 4pm.