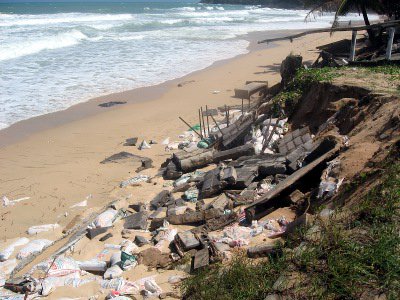 Under orders from the Cherng Talay Tambon Administration Organization (OrBorTor), which built the sea wall to prevent coastal erosion, lifeguards have roped off the area as a safety precaution.

“It has been broken since Wednesday, but we still haven’t heard anything from Cherng Talay OrBorTor. They just sent lifeguards to rope off the area along the beach as a no-entry zone – [they’ve done] nothing else,” said 49-year-old beach vendor Mr Boonchuen Auengsakul.

“We are waiting for the OrBorTor to urgently fix the wall because we are worried that the waves will only get stronger and we soon won’t have anything to protect,” he said.

Pranee Charoenkul, who runs a Thai massage service on the beach, said the current strong surf is making quick action by the OrBorTor unlikely.

“I don’t think the OrBorTor can fix the wall soon because the waves are too strong and come very close to the shore. It’s is too dangerous to get on the beach and fix the wall,” she said.

The closure of the area along the beach is taking its toll on the local vendors’ businesses. Yesterday, the Gazette arrived to find local vendors packing up their businesses, hoping to find trade further up the beach.

“I have to move further up the beach and set up a temporary drink counter there, but some of the vendors use the space in the car park to sell their things,” said Mr Boonchuen.

About 15 shops and restaurants along the beach are temporarily closed, explained Ms Pranee.

“Even before the [tourism] low season started, only a small number of tourists visited here. Now that the beach is closed, it is so quiet. Lately, I have had only a few customers a day,” she said.

So far, attempts by the Phuket Gazette to confirm what action is being taken by the Cherng Talay OrborTor have failed to elicit a reply.

Pickups spin out of control on major Phuket road