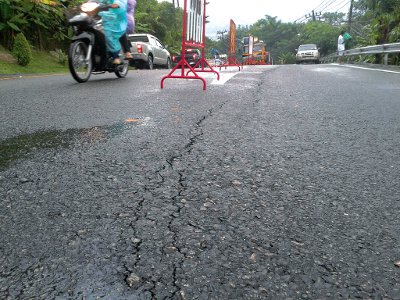 PHUKET Governor Tri Augkaradacha is pressing the central government for an emergency 80-million-baht budget to shore up Phra Barami Road on Patong Hill, which is deemed at high risk of collapse from landslide due to heavy monsoon-season rain.

A section of the road, just west of the Chinese shrine at the top of the hill, is already earmarked for repairs under a project plan already submitted to the Highways Department. This section first collapsed during heavy rains last October, then again in early May with the advent of this year’s monsoon.

The local Highways Department office expects to begin work on that project, using “soilnails” and sprayed concrete, some time this month.

However a longer section of the road on the Kathu side that slumped following a landslide in October last year remains at risk.

Governor Tri told the Gazette that he is aware of the potential for disaster if the vital route becomes impassable.

“When we hosted the mobile Cabinet meeting in Phuket, I proposed this project for Cabinet approval. It was was approved, but only under the budget for fiscal year 2013,” said Governor Tri.

As fiscal 2013 begins on October 1, 2012, improvements to the road could not begin until the end of the current monsoon season.

“With the unexpected earthquake off Sumatra in Indonesia in April, we began to realize that this project could not be put on hold that long. We saw people try to evacuate Patong [after the tsunami alert] and realized that this route is the main escape route from the Patong area. If there is another unfortunate event like a tsunami or earthquake, this road must be accessible during the ensuing turmoil,” he said.

To expedite the work, Governor Tri has decided to request spending the 80mn baht allocated under the 2013 budget during the current fiscal year.

“Interior Minister Yongyuth Wichaidit suggested that I re-propose the budget for instant approval, which I did. They are now reviewing the proposal, but I haven’t heard anything back from them yet,” he explained.

If approved, the project would involve compacting the soil beneath sections of the road to strengthen its base, as well as widening the road to increase traffic flow capacity, he said.

“I hope the budget is approved soon since it is already rainy season and this project is necessary for the Phuket economy,” he ended.