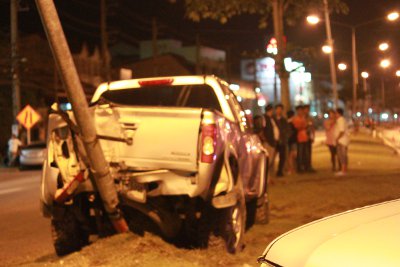 PHUKET: Two pickup trucks spun out of control and ended up on the median strip of Phuket’s busy Thepkrasattri Road in Koh Kaew last night after a third pickup truck screeched to halt after hitting a dog.

Somchai Tankanya, 40, was driving in the right-hand lane when suddenly a pickup to his left, being driven by a 36-year-old who declined to give his name to the Gazette, cut across the front of his vehicle.

The 36-year-old told Phuket City Police he was forced to swerve to avoid ramming a third pickup truck in front of him that screeched to a halt after hitting a dog.

The two pickups spun out of control, with the 36-year-old’s vehicle coming to rest after hitting a light pole.

No people were injured in the accident.

The condition of the dog was not reported.

The two pickups were taken to Phuket City Police Station this morning as evidence.

UPDATE: The Gazette has since confirmed that the dog died at the scene.