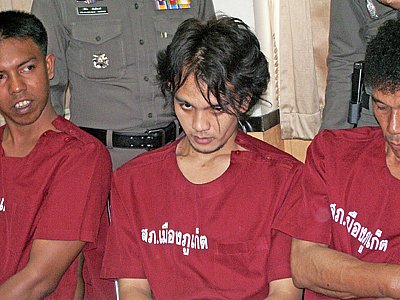 PHUKET: Crystal meth dealers in Phuket are attracting new users by claiming the drug has cosmetic benefits. Doctors say that although the stimulant may cause some changes in a user’s physical appearance, it is far from the desired effect.

Concerned about a rise in the use of ya ice (crystal methamphetamine) in Phuket and nearby provinces, police and health officials say drug dealers are falsely touting it as a weight loss aid and skin whitening agent to lure in new users.

Pramote Phumprakun, superintendent of the Narcotics Suppression Bureau Division (NSBD) regional office, described the ya ice problem as “epidemic” despite the best efforts of authorities to suppress it.

“Even though we monitor all trafficking activities as closely as possible, it seems their networks are becoming more complicated and difficult to trace,” said Superintendent Pramote.

Ya ice and ya bah (methamphetamine in pill form) continue to be the illegal narcotics in highest demand in the region, he said.

The proliferation of ya ice use is particularly pronounced among Phuket youths. Despite the lack of any medical research or scientific proof, many choose to believe skin whitening is a positive side effect, he said.

“These drug traffickers are clever. They propagate these beliefs among youths, who accept it without proof. The only thing we can prove about ya ice is that it can affect your physical and mental health. The sad part is that there are a lot of people falling for the trick, many of them first-time users,” he added.

To catch a glimpse into the world of young meth users, the Phuket Gazette spoke to one teenage male who uses ya ice, but claims not to be addicted.

Under the condition of anonymity, he confirmed that ya ice is popular among local youths as a whitening agent, but even more so for weight loss.

“It’s true that ya ice is used for skin whitening, mostly by girls. When you use it in an air-
conditioned room your skin will lighten faster than usual, but it won’t be a natural white. It will be more like the skin you see on a vampire in a Twilight movie,” he said.

“Not only girls use ya ice for dieting. Guys are using it too. I know one guy who used it five times and he lost so much weight he looked like a different person,” he said.

“Go to any well-known high school in Phuket and you will be able to get it. Girls use ya ice for fun while having sex, but sometimes they get addicted and turn to prostitution, having sex with strangers. Ice, sex and teen prostitution are all sort of chained together.

“Costs starts from 500 to 1,000 baht. Besides the money they get from parents, either by asking or stealing, teenage drug addicts will do anything to get money to afford ya ice, even criminal activities,” he said.

“For me, I do ya ice for fun, not for dieting or skin whitening. I just wanted to try it my first time. It was cool, having fun for no reason. I did not feel hungry at all. I’ll stand by the fact that ya ice really will make you lose weight,” he said.

Psychiatric specialist Dr Natnaiyana Anansiri-phand, who runs a clinic on Yaowarat Road, told the Gazette she conducted a short study of Phuket teens using ya ice for weight loss and skin whitening after hearing reports about it.

“Ya ice acts on parts of the brain that control appetite, so you will not be hungry or tired [when using it]. Some users lose weight, but it is only temporary. When you stop using it, you will just eat more,” she said.

“As for skin whitening, loss of appetite causes an iron deficiency that causes the user to look pale, but it doesn’t have any real whitening effect. Never forget that it is an addictive drug; you cannot stop using it easily. Many patients told me that they started using it recreationally, then had to turn to dealing in order to support their growing habits,” she said.

“As for being a skin whitener, that’s impossible. Addicts suffer from a lack of vitamins, minerals and other nutrients and end up with rough complexions,” he said.

Dr Sirisak Thitidilokrat, director of the Kalaya Ratchanakarin Institute, said long-term meth use was not only useless for skin whitening, but caused mental health problems as well. As for weight loss, many addicts are also overweight alcoholics, he wrote in a recent article.

Pattapong Santakarn, a dermatologist at Mission Hospital in Phuket, said, “I have barely heard anything about using ya ice for skin whitening. As far as I know there is no medical research on this because ya ice is drug that would never be recommended by reputable physicians. In my opinion, using ya ice for skin whitening purposes is just a kind of personal belief,” he said.

The head of the psychiatric department at Vachira Phuket Hospital said his patients seldom ever mentioned using ya ice to lose weight, but said he had read reports about it in the national media.

“In my opinion, using ya ice for dieting is only an excuse to mask the real motives. There are plenty of weight-loss methods. Using ya ice is way too dangerous, especially when you have so many better and safer options available,” he said.

“During the initial stages, the user and those around him or her probably will not be able to note any unusual physical changes (click here to see chart of adverse effects – image: Mikael Haggstrom), but in fact the drug is already starting to have a psychological effect,” he said.

“Apart from being very expensive, ya ice can harm your physical and mental well-being. Who would be willing to suffer brain damage just to look skinny?” he asked.

How common is it?

Ya ice use is all too common all over the world. In Patong, it is common among thirty-somethings. It is common because it is a cheap alternative to cocaine and it is readily available in night clubs.

How often do you use it?

I do it about once every few years as I am dearly afraid of becoming addicted. They say you only have to do it three days in a row to become addicted. I had a friend who used it regularly for about a year. It nearly destroyed his mind, as it does to most ya ice drug abusers. It took a month-long detox to overcome his addiction and clear his mind. My friend’s daughter was also addicted. Being younger, once she was removed from her druggie friends it only took her six months to recover.

Are you aware of Thai youths using ya ice for weight loss and skin whitening?

Not specifically for those reasons. However, they are both symptoms of drug abuse. As ya ice is an appetite suppressant, most users experience weight loss, and female users are actually pleased by the results. Some in Phuket stay up all night getting high and then sleep all day tend to spend less time in the sun. As a result, their skin wouldn’t get darker, but I doubt the drug itself makes your skin lighter.

Why do people take ya ice?

People use it to heighten their sensations. Naturally, it’s conducive to prolonged sex, so people do it to improve their sex lives too. Unfortunately, this leads to unsafe sex, w

Iranian Actress sentenced to 90 lashes for role in Australian film