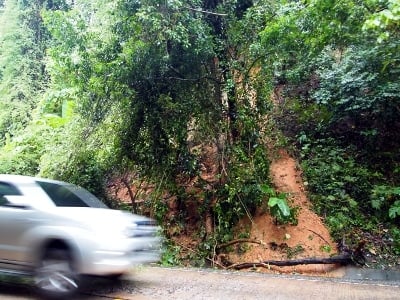 PHUKET: Two more small landslides were reported in Phuket’s Rassada subdistrict yesterday, one causing a temporary road closure and the other damaging the wall of a hillside residential estate.

The first slide hit on Monday night the Ban Thepkrasattri housing estate just south of Mission Hospital on Thepkrasattri Road inbound, damaging a five-meter section at the base of a retaining wall of the upscale hillside development.

The second slide occurred along a hilly section of Ruampattana Road at about the same time, sending uprooted trees onto the narrow road that connects downtown Rassada with the government district in Phuket Town.

Ruampattana Road was open this morning, but there were still trees in the breakdown lane, indicating that additional slippage occurred overnight.

Rassada Mayor Suratin Lianudom said municipal officials are still on high alert at landslide risk zones throughout the sub-district, including the section of the bypass road northbound where homes and businesses in the vicinity of the Adisak Equipment company were evacuated over the weekend following slides that damaged several businesses.

Despite continuing heavy rains in the area in subsequent days, the catastrophic slide feared by many has yet to occur.

A source monitoring the situation there said this morning he noticed larger-than-ever volumes of sediment-laden water flowing down an access road that connects the bypass road to the back of the Adisak Equipment building.

This could indicate a shift in the natural drainage of the area, where a tin mine pond is also located upslope, the source said.

More heavy rain is likely today. The Thai Meteorological Department forecast for the 24-hour period starting at 7am today calls for “widespread thundershowers covering more than 80% of the area and isolated heavy to very heavy rain”.