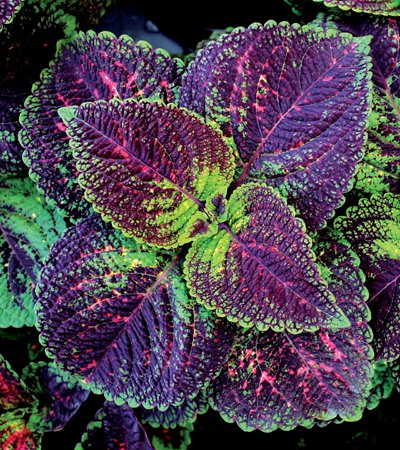 PHUKET: The humble coleus was one of the first houseplants to become generally available in Europe after WWII. In those days, it came in relatively few variations, but it has since been hybridized so extensively that it now has what may be the largest range of foliage colors of any plant. Some people may regard it as a bit vulgar, but make no mistake; it will brighten up your living room or your flower bed no end in Phuket.

The leaves of the newer cultivars are brilliantly colored, invariably in two or more hues of pink, green, yellow, maroon, or a purple so deep it’s almost black. Typical are the serrated leaves which resemble those of the stinging nettle, hence the common name “lame nettle”, with its borders of one color and a contrasting center. As with so many variegated plants, the flowers, usually pink, are relatively insignificant.

Coleus, now classified as Solenostemon, or in another genus, Plectranthus, is easy to grow outdoors here in Phuket. However, it does not like full exposure to the tropical sun, and bone-dry soil will make it “leggy”. In fact, you will get stronger colors if your coleus is planted in filtered shade.

In most plant nurseries in Phuket, you will find it in a partially sheltered area. If it does get straggly or lose its vibrant colors, pinch the shoots back, temporarily increase the water and food supply, and, if it’s in a pot, move the container to a shady spot. One advantage of a pot is that several plants can be planted together where the contrasting variegations can show to best advantage.

The Thai name for coleus, ruu si phasom lao, is difficult to pronounce, but it’s a cinch to cultivate. It grows easily from seed (available in Phuket), but the seeds are tiny so press them lightly into the potting mix, and cover the container with plastic. Cuttings take readily and are best propagated by putting them in water for a few days where they will soon produce roots. Provided you remember that it is a succulent and therefore rather brittle, you will find it a very undemanding plant.

This is not the case for the difficult Mussaenda, or ‘Bangkok rose’. Unlike coleus, Mussaenda is an out-and-out shrub with woody stems, and although it does have its ardent fans, this writer is not one of them.

Certainly aurorae, which has pink or white edged flowers with pink sepals, is an unusual shrub which can grow into a large bush festooned with flowers. But the plain versions are truly plain, with flowers of a rather dull salmon pink. And in this writer’s experience at least, Mussaenda is disease-prone.

Between Central Festival and Tesco Lotus is a median strip which was left as a deep trench between the traffic lanes on either side when the road was widened. Someone had the bright idea of planting Mussaendas on the banks of this grassy area, but they have never flourished. Those that remain barely catch the eye as you drive past. Granted, the soil is poor, but plenty of shrubs or small trees would have been a better bet.

Phuket Gardening Tip of the week

There is something pleasurable about watching brilliantly hued dragonflies quartering your swimming pool. Amazing aerialists, they can hover, dart, and even fly backwards. They are such superior fliers that they catch and devour lots of mosquitoes which they trap with their legs.

But there is an unseen downside. If you have a fish pond or pot with small fish such as guppies or swordtails, you may find them disappearing at a fantastic speed.

The culprit? Probably one or more dragonfly nymphs – fierce creatures which live in the debris at the bottom of the water. They are voracious feeders and capture their prey with a long spiny pincer called a mask, which shoots out and impales small aquatic creatures.

Moreover, they spend up to five years in this larval state. You have been forewarned.

Phuket Movie Watcher: Arts news from around the world