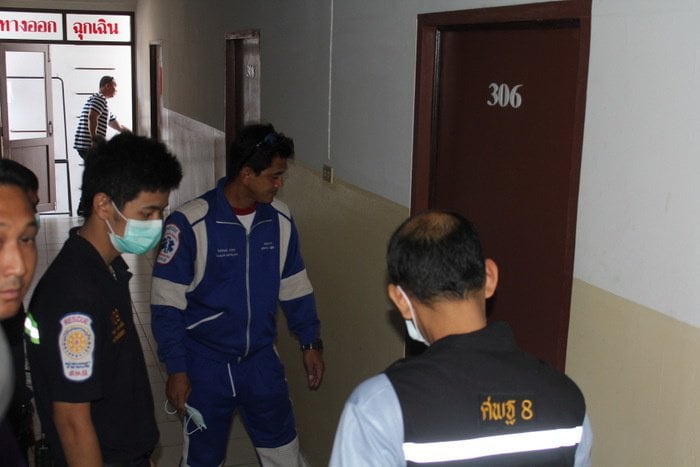 PHUKET: Police are looking for a man wanted for beating his masseuse girlfriend who was found dead by apparent suicide in Phuket Town yesterday morning.

Friends discovered the body of Taweepat Boontawee, 33, at her apartment at a four-story complex on Phun Pol Road Soi 7. She was found hanged by a bathrobe sash tied to a light fitting.

“The air conditioner and fan were still on,” said Capt Jariyawat Taencheun of the Phuket City Police.

“She left several messages of distress written with lipstick on her make-up mirror,” said Capt Jariyawat.

In her diary found in the room, she wrote: “I do not dare to see anyone, not even people who live downstairs. I am so embarrassed and angry. I do not want to leave like this. It is embarrassing among my friends, and to myself. Life is too hard, I want to end it now.”

“The note in her diary also apologized to her mother,” Capt Jariyawat added.

Forensic Police collected evidence from the scene and noted that beer bottles and cigarette butts were scattered throughout the room.

“Her friends and co-workers said that she was a lovely woman and very well liked,” said Capt Jariyawat.

“We were told that she went to her hometown in Sakon Nakhon for a breast augmentation, and took a month off work to recover from surgery. She was to return to work on Friday.”

Ms Taweepat, who worked at the nearby Angel Massage, was last seen just hours before dawn on Friday.

“She filed a complaint with Phuket City Police at about 3am,” Capt Jariyawat confirmed. “She reported that her ex-boyfriend [named by police only as “Mr Bung”] came to see her on Thursday night.

“Ms Taweepat said they had argued and that he began hitting her. Then he dragged her from her room to the parking lot, where he continued to beat her. Then he left with her cash, mobile phone and credit cards.”

After Ms Taweepat filed the complaint, her friends urged her to stay somewhere else as they were afraid Mr Bung would return.

“She declined their offers and asked to stay alone at her place,” Capt Jariyawat told the Phuket Gazette.

Police have identified Mr Bung through CCTV footage from cameras in the area, he added.

“We are not ready to reveal the man’s name, but we hope to arrest him soon,” Capt Jariyawat said.

Ms Taweepat’s body was taken to Vachira Phuket Hospital for confirmation of the cause of death and to await collection by relatives.