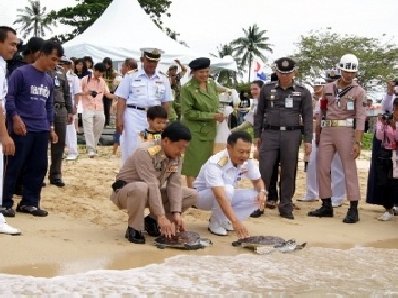 PHUKET: As dawn broke over Phuket this morning, the island began its celebrations of HM King Bhumibol Adulyadej’s 83rd birthday.

At the Rassada Municipality office and at Queen Sirikit Park on Dibuk Road in Phuket Town, people gathered at 7am to join in giving alms to Buddhist monks.

At 9am, the Phuket Provincial Administration Organization (PPAO) opened its doors for well-wishers to sign the HM The King’s birthday wish book.

At Cherng Talay, athletes and fun runners got the inaugural Ironman 70.3 Asia-Pacific Championship underway at Laguna Phuket, while at the south end of the island sailors racing in the 24th King’s Cup Regatta took to the water for final practice drills before the regatta gets underway tomorrow.

Most of the animals were tiny shrimp to help replenish local populations in the wild, but also included turtles.

Many other activities are being held across the island today.

This afternoon, students from British International School will perform a live violin concert at Loma Park in Patong, which will be followed by a candle-lighting ceremony at 4pm.

In Phuket Town, a candle-lighting ceremony will be held at the central stage in Saphan Hin, beginning at 5:30pm.