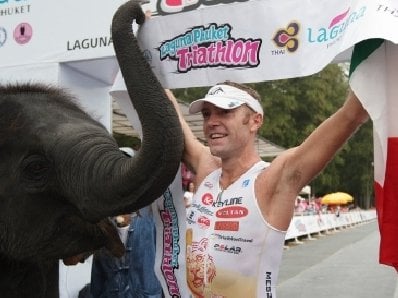 The race will also include a legend an Ironman legend, Ironman Craig Alexander from Australia.

It will get underway with the first wave at 7am at Laguna Phuket resort.

Ironman is triathlon’s ultimate challenge – a single day endurance test consisting of a 3.8km swim, a 180km cycle and a 42.2km run.

The 40 professional athletes will be joined by some 800 individual and relay team competitors from around the world.

The Ironman 70.3 Asia-Pacific Championship has its roots in the Laguna Phuket Triathlon, one of the most popular destination races on the circuit, which took place last weekend.

Newly crowned Laguna Phuket champions Massimo Cigana and Belinda Granger will be looking to complete back-to-back titles at Ironman 70.3 and take a share of the US$75,000 prize purse.

Speaking after his triathlon triumph at Laguna last Sunday, Italian Cigana was looking forward to following up his success at Ironman 70.3.

“This is always an amazing race and the prospect of the Ironman 70.3 Asia-Pacific Championship makes it a really special atmosphere in Phuket.”