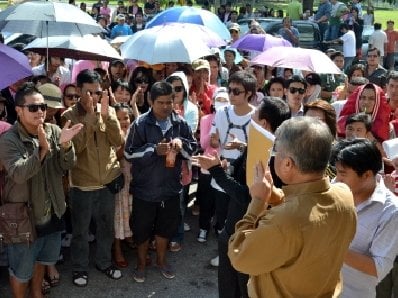 PHUKET: Vendors at the Banzaan Market behind Jungceylon massed at Phuket Provincial Hall yesterday afternoon to file a complaint over police handling of an extortion attempt.

The vendors handed Vice-Governor Weerawat Janpen a letter saying that at about 5pm on Monday two men claiming to be police officers demanded cash from them.

The men, both described as tall and dark skinned, told vendors they were from the Consumer Protection Division of the Central Investigation Bureau in Bangkok.

“Three vendors paid them 1,000 baht each because they were scared,” Tossapol Rungruengpawan, Vice President of the Patong Retailers Association, told the Phuket Gazette.

“However,” he added, “Some vendors smelled something fishy about this. So they called Kathu Police.”

An officer from Kathu Police Station promptly arrived at the market while the two men were still there.

All three “officers”, one genuine and two unconfirmed, were still at the market when a fourth man arrived calling himself “Snr Sgt Major Gai”.

Gai, dressed in a polo shirt and jeans, told the vendors he was from the “5th Crime Suppression Division” – a genuine police division based in Bangkok.

He threatened to arrest “everyone” if the vendors refused to pay his two subordinates, said the complaint.

Gai then left with one of his “officers” – leaving the other man behind.

The genuine policeman then took the remaining “officer” into custody and escorted him back to Kathu Police Station.

However, when the angry vendors arrived at the station, they found out that the man had been released because “Snr Sgt Major Gai” had called the station and ordered him to be let go.

“Kathu Police Deputy Superintendent Pratya Chansomwong has accepted our complaint about this and he said he would investigate the matter,” said Mr Tossapol.

“This is the first time this kind of thing has happened. We have had good relations with the Kathu police for more than 20 years. We are like family. Only this time we feel let down,” he added.

“I think they [the three men] were real police officers, but they were acting like mafia. So we are doubting that the police can protect us from such gangsters,” Mr Tossapol added.
“We are not asking much. We just want to work for a living peacefully,” he added.

Vice Governor Weerawat vowed the Phuket Provincial Office will investigate the incident. “We will go to the market and question each vendor and examine the facts,” he said.

Col Chalit, who three years ago was Superintendent of Chalong Police Station, is back in Phuket after completing his posting in Takuapa District, Phang Nga.