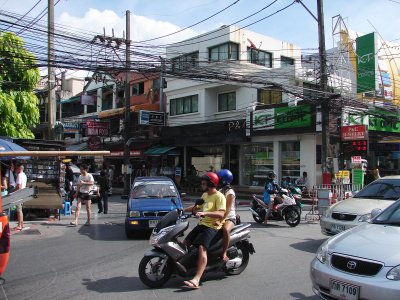 PHUKET: The new one-way traffic flow in Patong has caused havoc for some Phuket motorists.

Traffic jams have been reported at several junctions that were affected by the change.

“[To] those who thought the old way was crazy just because it allowed two-way traffic on too many east-west cross roads, check out how smooth traffic now flows at the northern and southern ends. What a mess!” said “Mike” in a comment posted in the Gazette Online Forum.

“The old system was the best. They only had to change the east-west roads like Soi Bangla to one-way roads and the system would work fine,” he added.

Another reader said, “Imagine the chaos this new system will cause during carnivals, festivals and other events, since there is now no other way to get to the back roads like Nanai unless you can make it to Bangla Rd, and that will take hours.”

Rune Hyll Krantz, of the Tourist Police Volunteers, today told the Phuket Gazette, “Now that Soi Ruamjai has been changed back to how it was, only two streets have changed direction: traffic on Soi Bangla now heads away from the beach and traffic on Sawatdirak Road now heads towards the beach.

“Other than that, everything seems fine. I was down there again this afternoon and traffic seemed to be flowing smoothly. Of course that changes with normal ‘busy’ hours, but that’s Phuket,” he said.

Regarding the negative feedback so far, he added, “This is normal every time there’s something new. It just takes time for people to get used to it.”

One effect since the new one-way system came into effect on Saturday, Mr Krantz noted, was that it now costs a “little more” for tuk-tuks to get to the beach.

“As they cannot go down Soi Bangla to get to the beach anymore, they have to go all the way down to the Hard Rock Cafe and come back up again,” he explained.