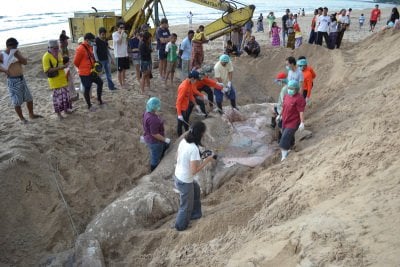 PHUKET: Staff from the Phuket Marine Biological Center (PMBC) were deployed to Koh Lanta Yai on Sunday after receiving a report from the Royal Thai Navy Maritime Security Center that an eight-ton whale shark had washed ashore at Klong Nin Beach.

From his office at the PMBC, Dr Kongkiat Kittiwattanawong, who heads the Endangered Species Unit (ESU), told the Phuket Gazette yesterday that he believed the whale shark had been dead for more than a week.

“I also heard from villagers in the area that three of them were caught in a fishing net and dragged to the shore by a fishing boat,” he added.

Despite villagers’ claims of three whale sharks beaching, a team from the Naval Security Center, based on nearby Koh Lanta Noi, found only a single 7.8-meter whale shark.

“We took a sample of its skin for examination before burying the carcass where it was found on the beach that same day,” said Dr Kongkiat.

“We’ve started checking its DNA to match it with other samples we have so we can understand more about whale sharks. We have also sent samples to a laboratory in Songkhla to check for heavy metal content,” he said.

Dr Kongkiat does not think the skin will give biologists any clues as to why the whale shark died, but he hopes it will help add to a deeper understanding of the species. However, he is interested in getting back the heavy metal contamination laboratory examination results.

“Once we receive the results, we will have a record of the amount of heavy metals in the water. Samples of the whale shark’s skin can indicate how much heavy metal contamination it ingested via the food chain,” said Dr Kongkiat.

“I do not know how long it will take to get the results from Songkhla [laboratory]. Due to budgetary constraints, they have to wait until they have a 15 to 20-sample batch before they can run the test,” he added.

Gambling “spectators’ to appeal to Phuket governor for clemency