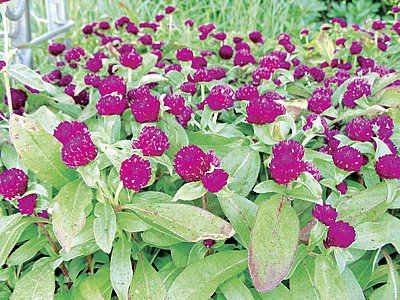 PHUKET: It’s been about a year since we talked about annuals. So that’s my excuse for returning to them today. The reason annuals don’t get much exposure in these columns is because they only exist for one year and will, like Wimbledon, make their statement – a floral one in this case – just once during that time.

Shrubs, on the other hand, will embellish your borders for years. But annuals are not to be disparaged: certainly for their ease of cultivation, massive bursts of vivid color and sheer abundance of blooms, they often outdo their illustrious cousins. Most, moreover, can be grown from seed, either bought in packets or collected from dried seed-heads.

Placed at the end of any flower index, the zinnia merits an early mention because it is a popular border plant the world over, and is a perfect example of an insignificant wild flower (from Mexico) that has become a thoroughbred.

Single varieties are reminiscent of an exotic daisy with a contrasting center and long stalks; double hybrids are dahlia-like in their size and the profusion of their petals.

Nowadays, the zinnia comes in many vibrant hues: pink, orange, yellow, purple and red. There is even a variety, developed in Japan, called “Crystal White”.

A double scarlet cultivar, which I first saw on the slopes of Doi Inthanon [Thailand’s highest mountain, in Chiang Mai province], and now available in packets, is perhaps my favorite. But the “profusion” series, a cross between the common “elegans” and the bushy “augustifolia” has produced outstanding plants, which are heat tolerant, easy to maintain, immune to disease, compact and free flowering. The only proviso: like all varieties, they need rich, well-drained soil.

At the other end of the scale is the portulaca or Rose moss. Unlike the zinnia, which is typically tall and upright, portulaca grandiflora has fleshy but narrow and prostrate leaves which creep over the surface of the ground. A modest plant, rarely more than six inches in height, the Latin suffix grandiflora offers a clue – given ample sunlight, it is an abundant bloomer.

Originally single flowered, the double flowers, a bit like small carnations, come in shades of red, pink, white and yellow, and look especially pretty at the front of a border or intermingled with taller plants. From dry regions of South America, it will survive dry conditions, requires little attention and does well in a container.

The gomphrena or Globe amaranth is another quintessentially tropical annual, another New World native. Distinctive in appearance, the neat, long-lasting flowers are white, pink, or an especially attractive deep magenta, and consist of densely packed florets, which are globular in shape. It flowers abundantly. The bushy foliage is quite dense and nicely complements the vivid globes. Much loved in Thailand, where it is used in large displays, the gomphrena does well either in a pot or flower bed. But it will wilt quickly if starved of water and may get top-heavy. Fortunately, the plant grows rapidly from seed.

The African marigold (tagetes erecta) will already be familiar to Western readers. Like the zinnia, it is a member of the aster family, and like the zinnia, it originally grew wild in Central America. It is a tough hombre and will tolerate a range of soils and climatic conditions. Tall, erect and a sturdy grower, its frilly leaves have a musky, pungent odor and are said to deter mosquitoes. It does not have the “cachet” of a zinnia or globe amaranth, but Thais adore its bright colors, and use its large yellow or orange blooms in traditional garlands. A good annual for the rookie gardener, it will produce masses of flowers for a long period if the seed pods are removed.

Tip of the week – soil
Soil supports plant roots and gives them access to nutrients, water and air. Most annual and shrub roots thrive in topsoil, which is biologically active and most affected by weather.

In Phuket, the topsoil is a thin layer, only a few inches in depth. Good top soil is composed mainly of loam, which contains a balance of clay, sand, silt and organic matter. It holds water but does not get saturated.

After construction, there is often no top soil left. Below is a gritty clay which compacts in dry weather.

It contains few nutrients and little in the way of pore spaces.

To improve or expand areas of top soil, add compost or fresh top soil from another source.

With container plants, try a mixture of compost (the stuff in bags that encourages root development, but is low in nutrients) and loam.

Phuket Books: A question of savages