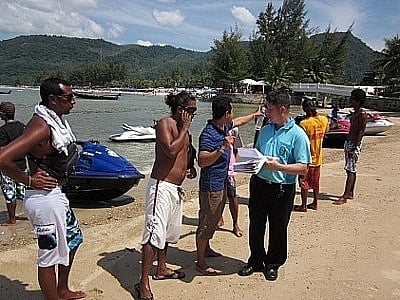 PHUKET: The issue of jet-ski insurance, a topic that never seems to be off the back-burner, resurfaced earlier this month at the Honorary Consuls’ regular four-monthly meeting.

British Honorary Consul Martin Carpenter asked the Marine Department chief if he could provide clear information warning tourists of the potential quagmire they face should they get into problems while renting a jet-ski.

As a result of that request, Phuripat Theerakulpisut, Director of the local Marine Department office, promulgated copies of the current insurance policies held by jet-ski renters. (Click here to see a jet-ski rental agreement and insurance policy, and read a summary of them at the bottom of this report.)

This was not always the case. Reported in the Phuket Gazette newspaper in April 2011, was the near collapse, a mere two years after its launch, of the only jet-ski policy brokered by Ayudhya Insurance PCL. The threatened collapse was caused by the constant high claims submitted by jet-ski operators for damage by tourists to their rented machines.

The history of jet-skis in Phuket dates back to the last century and includes a number of tourist deaths and serious injuries, including injuries sustained by tourists in recurring altercations with rental operators.

In February 1998, it was reported there were about 250 machines operating here, of which only 22 were registered.

In March 2000, routinely faced with a barrage of complaints, the Provincial Office implemented a “jet-ski management program” covering the five beaches of Kata, Karon, Patong, Kamala and Bangtao. The following month Provincial officers and officials from across the island gathered and decided that tough action against the jet-ski operators was the way forward.

At that time, Marine officers examined and registered 219 jet-skis. That figure was capped by the Phuket Provincial Office for seven years, with no more rental jet skis to be stationed on the island until March 2004.

Even then, laws were in place to regulate jet-skis. The Public Health and Safety Act 1992 barred jet-ski operators from several practices, such as riding in swimming zones and using jet-skis for commercial purposes, which might be construed to include the rental business. The Public Health and Safety Act also enforces the mandatory wearing of life-vests.

The provision against using jet-skis for commercial purposes has always been ignored.

An even older and more specific act is the 1913 Navigation act. This requires all vessels, including jet-skis, to be registered with the Harbor Department. Furthermore, a person driving a jet-ski must hold at least a Helmsman Level 2 license, a qualification that requires two years’ documented proof of experience aboard a Thai-flagged ship, which would effectively preclude tourists from ever riding a jet ski.

The license provision in the Navigation Act has, likewise, always been ignored.

By July of last year, with complaints from tourists increasing and foreign officials becoming more vocal about jet-ski scams, not to mention a “turf war” threatening to erupt on Bang Tao Beach in January this year, Phuket Governor Tri Augkaradacha stepped in to enforce provincial policy on the operators.

He instigated zoning of six beaches where jet-ski operators ply their trade: Kata, Karon, Patong, Kamala, Bang Tao and a new addition at Koh Naka. The zones separated swimmers from jet-skis and were marked with buoys placed by the local authorities.

Within the last few years more jet-skis have started to appear on the beaches. A recent investigation counted an additional 67 of them.

The number of unregistered jet-skis doing business at these beaches is not publicly known.

To control the growth of the hazardous machines, the Marine Department says it will not register more than the 286 already in operation. The department also insists, publicly, that those operators must follow the regulations or risk losing their franchise.

In summary, to continue his business, an operator must in theory ensure that his jet-ski is covered by adequate insurance and registered with the Marine Department.

Once registered, those jet-skis must display an orange sticker identifying its number, the owner and its working location.

In the case of a jet-ski damaged beyond repair, the jet-ski owner(s) must apply to have the unserviceable machine struck from the register. Only after that can they apply to register and operate a replacement machine. This will be granted at the discretion of the Marine Department, if approved by the local jet-ski “club”, on which all operators must be a member.

Foreigners are not allowed to operate a jet-ski rental business and are this ineligible to join a “club”.

Two weeks ago, Mr Phuripat confirmed that 286 jet-skis were the limit and that no more can be registered.

“Actually 281 jet-skis have been registered; five were not presented to us for registration. If the owners attempt to rent them out, they will be caught,” he asserted.

“Jet-skis can still be registered with the Marine Department, but not for renting to the public. If caught, they risk a fine of up to 10,000 baht,” he added.

Speaking specifically about the Bang Tao jet-ski operators, Mr Phuripat said that the local dispute between local operators and a new foreign-owned concern had been resolved and the illegal foreign-owned jet skis were no longer operating.

‘The way things are at the moment is that the current agreement between the Provincial Office and the jet-ski operators is for two years and will end next July,” said Mr Phuripat.

“Nearer the time we will have meeting with the Provincial Office to see the results. If the project is not successful, it can be canceled. However, all jet-ski operators have agreed to follow the regulations.”

Looking to the future, Mr Phuripat said it depended on the Phuket Governor to continue the measures and to improve them. Certainly there will be no more jet-skis without discussions with the Provincial Office.

Jet skis are required by the Marine Department to have “first class” insurance cover. Currently many rental operators are going for two policies. One to cover the mandatory requirement to insure riders and passengers, and a second covering damage to property while also providing a “reserve” should medical bills out-strip the limit of the first policy.

The TUI policy covers the jet-ski driver and one passenger for personal injury or death, and limited medical costs. Each contract will not pay more than 300,000 baht per jet-ski annually.

Death or permanent disability of rider or passenger: 100,000 baht.

Medical costs of rider or passenger: up to 15,000 baht per person.

SAGI’s insurance policy covers the same range of risks at a lower payout, but also includes third party liability and damage, including damage to the jet-ski. The contract will not pay more than a total of 200,000 baht per policy.< — Atchaa Khamlo