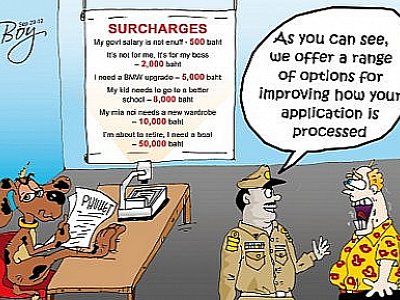 PHUKET: The mantra of government officials regurgitating their need to preserve “Phuket’s tourism image” and to “restore tourist confidence” in what is promoted as a world-class international tourism destination, took an interesting twist last week.

One would think that local officials – and any business related to Phuket tourism – would have leapt at the chance to debunk a vacuous report by a British tabloid claiming that an English woman on holiday suffered serious injuries in a jellyfish attack “somewhere near Phuket”.

After all, who would want to take their family half way around the world for a holiday where they would run the risk of suffering a toxic and potentially fatal injection while swimming?

But neither the government nor the private sector here stepped up to challenge the facts, or absence of them, in the tabloid’s curious piece of journalism. Even the local hospitals were economical in their response to the damaging report.

So the Phuket Gazette reporting team had to go to great lengths to take down the myth that the woman was stung anywhere near Phuket, when she had most likely suffered the attack much closer to where she was first treated for her injuries: in Hua Hin on the Gulf of Thailand, about 600 kilometers away from our island in the Andaman Sea.

And how good was Phuket’s response in protecting our “toursim [and investment quality] image” in the face of the ongoing raids and so-called “investigations” into corruption by local government officials and encroachment on protected national forest lands?

With each passing day, the raids increasingly resembled nothing more than public relations stunts, possibly to boost Thailand’s political image among neighboring countries ahead of the Asean Economic Community (AEC) launch in 2015.

If the Department of National Parks, Wildlife and Conservation, and the Public Sector Anti-Corruption Commission (PACC) have been genuine in their efforts to eliminate corruption, they certainly deserve the media spotlight. For men in such positions taking such risks, there could little place safer than in plain view of the public.

Yet the revelation this week of a landowner denying outright any knowledge that the legitimate title to his family’s land had been used in an attempt to illegally acquire state land, threw new light on an age-old axiom: corrupt officers need go no further than their own filing cabinets to develop and cash in on lucrative business opportunities.

Now, who among the world’s major investors would pour funds into Phuket or elsewhere in Thailand if the rug could be jerked out from underneath their feet so easily by the nation’s bureaucrats?

Perhaps the Thai officials who really can’t resist corruption should at least standardize and publish their charges so that the rest of us, as victims, at least know what we’re paying for.

Phuket Opinion: Being negative can positively save lives

Phuket Opinion: Through the revolving door