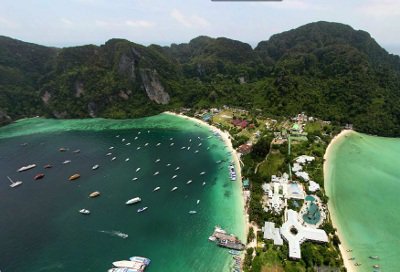 PHUKET: A 29-year-old Korean tourist on holiday in Phuket has died while snorkeling off Phi Phi Island during a day trip to the popular beach resort.

The man, named by Tourist Police as Jury Kuk Kim, was on a Korean package tour and staying at a hotel in Patong.

The tour group, comprising about 40 tourists from South Korea, arrived in Phuket on Thursday and were due to depart today (September 30).

Tour guide Nattaya Srimaneethan told the Phuket Gazette that about 20 of the tour party went on a day trip to Phi Phi Island, arriving at the popular beach resort isle at about 11:30am.

“We had lunch at about 12:30pm and our Korean tour guide explained to the tour group they had one hour free time to go enjoy themselves and were to regroup at 1:30pm.

“The man [Mr Kim] went off to a beach with a woman from the group. While she laid on the beach sunbathing, he went snorkeling,” explained Ms Nattaya.

Some time during the hour, foreign tourists swimming nearby noticed that Mr Kim was floating immobile for a long time and that his snorkel was submerged, so they went to check on him and found that he was unconscious, she said.

“They pulled him on onto the beach and tried to revive him, but when that failed they rushed him to Phi Phi Hospital, which was close by,” she said.

Mr Kim’s body was returned to Phuket by speedboat and taken to Vachira Phuket Hospital, in Phuket Town, for further medical examination in order to determine any underlying cause of death, Tourist Police told the Gazette.

The Embassy of the Republic of Korea in Bangkok had been notified of the incident and Mr Kim’s older sister was en route to Phuket to make arrangements for her now lost brother, Tourist Police said.

Car cut in half on impact with Phuket power pole