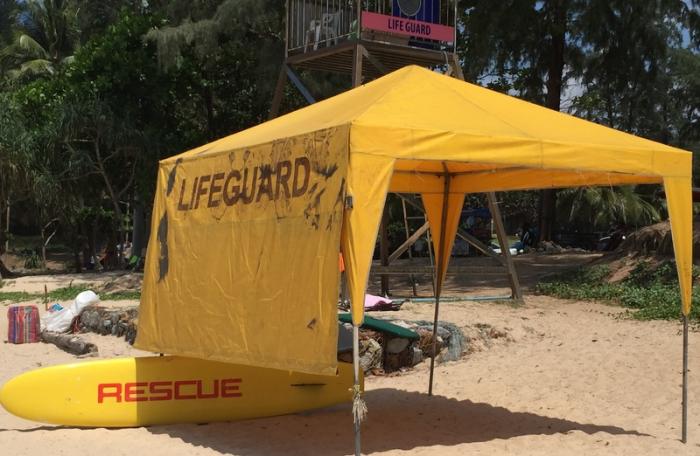 PHUKET: A Laem Singh lifeguard quit his job last month after a group of angry umbrella vendors reportedly asked him to remove his government-issued lifeguard tent, claiming the space as theirs.

The vendors said they were ‘locals’ and were authorized to use the space to set up umbrellas and mats for rent.

Almost exactly a year ago, former Phuket Vice Governor Chokdee Amornwat removed all beach chairs and umbrellas set up by illegal vendors on Laem Singh Beach, which was declared as one of Phuket’s ‘virgin beaches’ (story here).

Fearing a violent confrontation, the lifeguard on duty disassembled his stand and finished his shift elsewhere. At the end of the day, he turned in his gear and quit his job.

A lifeguard supervisor first reported the incident to the Kamala OrBorTor and the Phuket Provincial Administration Organization, and also informed the chief of the Phuket Lifeguard Service.

Lifeguard Supervisor Viroon Chuasaman told the Phuket Gazette that they removed the tent in order to avoid a conflict with locals and wish to co-exist with them in order to do what’s best for visitors’ safety.

At thetime, no visibly marked lifeguard station is available at Laem Singh, which is isolated from neighboring beaches by rocky headlands on both sides, with limited vehicle access.

“After a rescue, victims who can’t walk must be carried up a steep rocky trail on a backboard to reach the nearest road,” Daren Jenner, a volunteer lifeguard at Surin Beach, told the Phuket Gazette.

“In order to serve the beachgoing public properly, lifeguards must place their shade kiosk where they have the best view of the beach. If we can’t see you, we can’t help you,” he added.

Sayan Bureerak, head of Surin Beach Lifeguards, confirmed that Laem Singh now has only one lifeguard on duty, who shares an umbrella with umbrella and jet-ski renters.

“We would send him reinforcements from Surin, but the guards at Surin already have their hands full,” Mr Sayan told the Phuket Gazette.