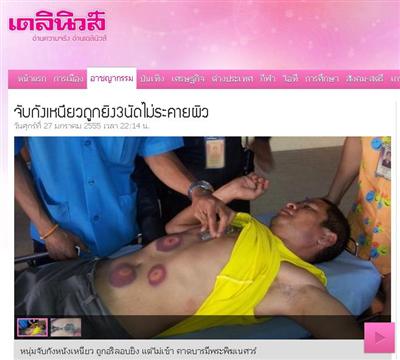 PHUKET: A man shot three times in the abdomen yesterday said a sacred talisman prevented the projectiles from breaking his skin, but police think it was because they were fired by a slingshot — not a gun.

Prepared for the worst, he rushed to the scene with other officers and members of the Phuket Provincial Administration Organization (OrBorJor) Tourist Rescue Center.

Arriving at a construction site at the Rawana Hotel, opposite the Rawai Municipality Office, they found everyone working normally, as if nothing had happened.

“Then I saw a drunk man staggering about in a very foul mood and learned that he was the one who had been shot. I checked his body and found three severe bruise marks on his midsection,” Capt Atthawat said.

The man was identified as Thepsueb, a 44-year-old from Nakhon Ratchasima province in the northeast of Thailand.

“We sent Mr Jirawat to Vachira Phuket Hospital for further examination. Physically he was fine, but he was very angry that he got shot,” Capt Atthawat said.

Mr Jirawat told the police, “I was drinking with two friends after work. Then I saw Mr Rabieb, a 67-year-old man I had an argument with a long time ago. He walked past where we were sitting.

“After that, I left the group to go to the bathroom,” he said.

Thai men sometimes use the phrase pai ying krataay (“go shoot a rabbit”) when excusing themselves from a drinking session to go urinate. But in this instance no rabbits were shot and the intended urination brought pain, not relief.

“I felt something hit my stomach at least three times. I didn’t feel any pain for the first few minutes, but when I lifted by shirt I saw that I had been shot.

“Fortunately the bullets didn’t go through the skin. I believe it must be the Ganesh talisman from a temple in Phatthalung province that protected me from the bullets,” Mr Jirawat said.

Police were somewhat skeptical of the explanation.

“I don’t believe Mr Jirawat was shot by a gun. We investigated the scene and we found no spent cartridges.

“All we found was one slingshot on the ground, so I believe it is more likely he was shot with that weapon,” Capt Atthawat said.

Despite this police would still invite Mr Rabieb, whose name translates as “Mr Spick-and-Span”, to Chalong Police Station for questioning, he added.