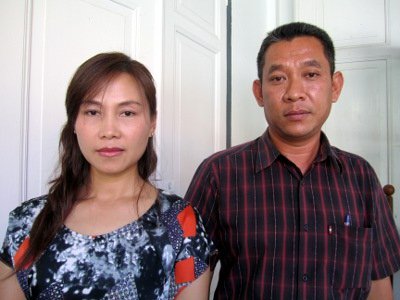 PHUKET: Jaruwan Wathanapumchoo and her brother Prasit yesterday publicly refuted all allegations that they were in any way involved in the trafficking of elephant meat to Phuket to serve as “exotic food” in selected restaurants.

The public joint-statement, made at a press conference at Phuket Provincial Hall yesterday, follows allegations of elephant meat trading made against them by two national newspapers.

According to Ms Jaruwan, both the Daily News and Thai Rath Today published articles stating that their vehicle, black Phuket-registered Suzuki Vitara, was involved in the transportation of elephant meat from Kaeng Krachan in Phetchburi province to restaurants in Phuket.

Ms Jaruwan believes the allegations are a case of mistaken identity resulting from a trip she and her mother made in December to visit her brother Prasit, who manages the family’s rubber plantations in Kaeng Krachan.

Mr Prasit had used the vehicle to make several trips to Phuket, which Ms Jaruwan believes made people suspicious, given the recent news coverage of elephant meat trading, which has since been echoed by major newspapers around the world.

“I wasn’t paying attention when I first heard the news about a black Suzuki Vitara with the same Phuket vehicle registration number as ours. I thought it was just a coincidence,” she said.

“It wasn’t until I read the two newspaper articles saying that they had followed our vehicle and seen it parked outside our business in Phuket Town that I realized what was happening.”

Ms Jaruwan said that her company, AC Consulting Group Co Ltd, specializing in accounting and legal services, had been operating for more than 10 years.

“This is why we have decided to hold this press conference,” she said.

“I have never been involved with the restaurant business and have never had anything to do with elephant meat,” she stated.

“We have to put a stop to those implicating us in the murder of elephants. We are willing to be charged in order to have our names cleared,” she said.

“Please don’t accuse us without having any proof,” she added.

Ms Jaruwan reported that after hearing the allegations she took her Suzuki Vitara voluntarily to be examined by the investigating police officers in Kaeng Krachan.

Despite being given the all-clear by the Kangkrajan Police, she still intends to visit the Royal Thai Police Headquarters in Bangkok to proclaim her family’s innocence in the matter.

“In terms of suing or legal action, I cannot say yet. I’ll leave that to our lawyer,” she said.

“You know we love elephants. I would never ever harm any elephant,” he said.

Phuket’s Bebe and Boo Boo on leave from active duty