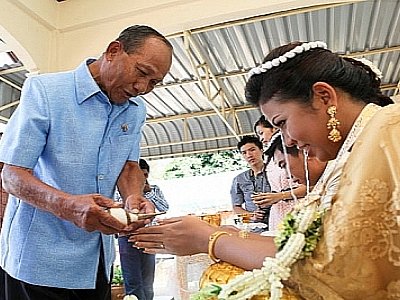 PHUKET: Couples wanting to tie the knot in Phuket on Valentine’s Day might consider taking part in a mass wedding ceremony to be staged at Laem Phromthep in Rawai next month.

The organizers are seeking 108 Thai and foreign couples to take part in the event, which is intended to promote Phuket as a wedding and honeymoon vacation destination.

The event is being organized by the Suanluang Inter Wedding Company, which hopes to sign up 108 couples in time for the event.

Packages are available starting at 49,000 baht for the first nine couples, according to the event website.

The five-day packages include pick-up and send-off from Phuket Airport and include accommodations at host resorts and a variety of events including an “exotic” dinner (not elephant) at Kan Eang@Pier Restaurant in Chalong; dinner and cultural stage show at Phuket FantaSea in Kamala; merit-making ceremony with 99 monks at Chalong Temple; and sightseeing and souvenir shopping tours.

The promotion is supported by the Phuket Provincial Office, Phuket Rajabhat University, Rawai Municipality and sponsor hotels including the Dusit Thani Laguna Phuket.

The mass-wedding event comes just as Phuket’s reputation as a wedding destination appears to be waxing like a lover’s moon.

A recent survey released by Korean firm Hana Tour found the island was the top choice (23.9%) to wed among Korean couples, followed by the Philippines (16.4%), the US state of Hawaii (7.4%), the Indonesian island of Bali (6.9%), and destinations in Western Europe, which combined attracted on 6.3% of the vote.

No less enthusiastic about Phuket’s nuptial potential are Indians, who are famed for elaborate wedding feasts.

Phuket is prepared to host several lavish weddings for Indian couples tying the knot in 2012, with top Phuket officials offering their help to smooth the way for wedding parties.

Glimmer of hope for FC Phuket