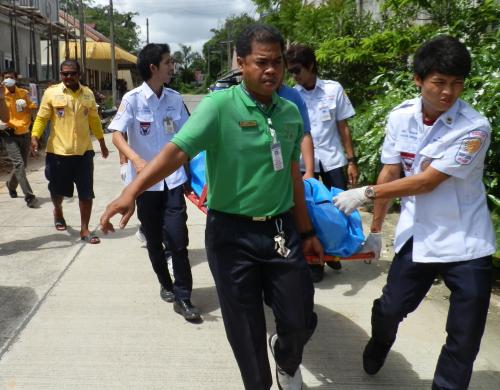 PHUKET: A Phuket construction worker died yesterday after falling from scaffolding at a house being built in Thalang.

Thalang Police were called to the site, in Soi Lak Maung in Baan Muang Mai, at about 10:30am.

At the scene they found Manit Mongkhon, 42, from Nan Province in Northern Thailand, dead from a fatal head injury.

“The three of us were working inside the house. Manit was on the second floor scaffolding welding steel while the two of us were downstairs handing steel and equipment to him,” said Mr Sataphon.

“He suddenly fell and hit his head really hard on the floor. We believe that he fell because of an electric shock.” Mr Manoo added.

Thalang Police led by Capt Patiwat Yordkwan took photos of the scene as evidence for their investigation.

Mr Manit’s body was taken to Thalang Hospital to confirm the cause of death before releasing it to his family.