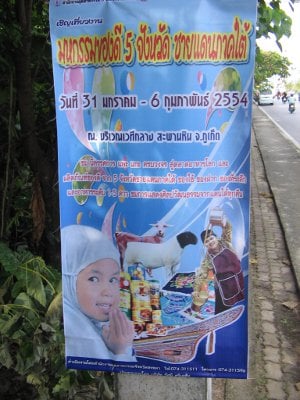 Boonchoke Khanabkeaw, Assistant Director of the Ministry of Industry office in Songkhla, said the event will showcase food products from the five southern border provinces of Songkhla, Satun, Pattani, Yala and Narathiwat.

Hosted in conjunction with Phuket City Municipality, the event will feature a total of about 100 exhibition booths – including those showing the ministry’s plans to develop an industry to export sheep and goat meat to markets in the Middle East.

Phuket was chosen to host the event because it is a holiday destination for a large number of tourists, both foreign and domestic, he said.

Mr Boonchoke said he was still unsure if beer would be sold.

His agency would first have to liaise with Phuket City Municipality to determine whether the event should be halal or not, he said.