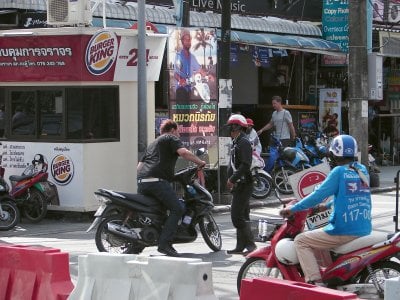 PHUKET: Police launched the new one-way traffic system in Patong on Saturday, with one change from the original plan: Soi Ruamjai is now one-way heading toward the beach, not one-way away from the beach.

Kathu Police Superintendent Arayapan Pukbuakhao explained to the Phuket Gazette that having the road heading away from the beach caused traffic jams on Prachanukroh Rd at the south end of Patong Beach.

The signs posted before the new one-way system was launched will be removed and replaced with updated signs, he said.

However, he added, “This is not final. We will review the new one-way system’s effectiveness and discuss it with Patong Municpality, maybe next week.”

Col Arayapan said there was still some confusion among motorists.

“Tourists still seem quite confused. As they are tourists, it is likely they do not see the new signs we have posted. We need to do more to publicize the new system so they can drive safely,” he said.

Some business operators located on the streets that changed traffic-flow direction complained about the switch.

“Some say they are losing customers because people cannot stop in front of their shops like they used to. The one-way flow forces the drivers to keep going in order to not block traffic behind them,” Col Arayapan said.

Yet for others the switch seems to have had a positive effect.

Somporn Bumrungsin, the security guard supervisor at the Courtyard by Marriott in Patong, said, “The new one-way system is much better because it is easier for tour mini-vans to park in front of the hotel, which makes my job much easier.

“And there seem to be much fewer accidents than before,” he added.