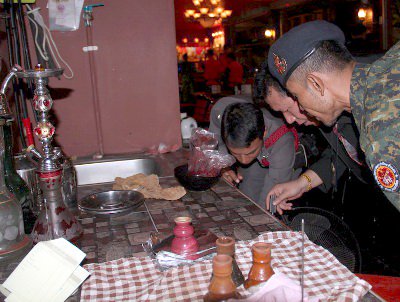 “Baraku [hookah] smoking is now popular among teenagers, and its use is spreading to more nightlife entertainment venues,” said Phuket Vice Governor Chamroen Tipayapongtada, who led the raids.

“This habit must be stopped, so teenagers will not be led to using ya bah [methamphetamine], ya ice [crystal methamphetamine] and other drugs,” he added.

V/Gov Chamroen and about 50 police officers and other officials began the raids in Phuket Town at about 9pm, starting with the Kiaw Tong bar on Thalang Road.

Later, both of them confessed to to having taken ya ice, said V/G Chamroen.

At the Monkey Hab, on Phuket Road, another youngster also tested positive.

The officers then moved on to Mor Samran, on Phang Nga Road, but as the bar was closing when the authorities arrived, they found hookah smoking paraphernalia but no customers, said V/G Chamroen.

The authorities seized the equipment to check it for traces of drugs.

“The suspects who tested positive were taken to Muang District Office. They will be put into a drug rehab program. If they are not willing to take part in the program, we will press criminal charges against them,” V/Gov Chamroen said.