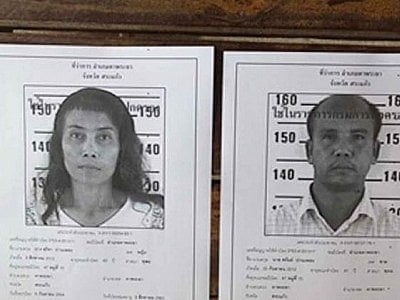 PHUKET: A gang that operated a fake call center and lured foreigners into transferring money into its bank accounts was busted yesterday.

The gang was based in Thailand’s Nonthaburi province. All 22 suspects arrested were either Chinese or Taiwanese.

According to Taiwan’s Ministry of Justice Investigation Bureau, such deceptive operations have cost Taiwanese people more than 10 billion baht each year.

“The arrests are a result of our three-month-long investigation,” Thailand’s Department of Special Investigation (DSI) chief Tharit Pengdit said yesterday. He said the DSI had conducted the investigation in collaboration with the Immigration Bureau.

Armed with a search warrant, DSI and relevant officials raided a rented house in Nonthaburi’s Pak Kret district at around 7am yesterday. Twenty-two suspects were arrested and had their computers, as well as phones, seized.

Also found at the scene were Chinese-language scripts being used to lure victims into transferring their cash to the gang-controlled bank accounts.

“The gang has trained its staff like an academy. The accomplices have been taught how to convince their victims,” Tharit said. He said the investigation showed many call centers had operated like franchisees.

“They have been linked to deceptive call centers based in China and Taiwan, too. Those call centers have targeted Thais,” Tharit said.

Immigration Bureau’s deputy chief, Pol Colonel Chatchai Lamsaeng, said all 22 suspects would be prosecuted for violating immigration laws because they had traveled to Thailand on tourist visas.

All are in good condition and awaiting the court’s ruling, he said.

The officer said the court asked their employer, a gold mining company in Oddar Meanchey, to submit documents regarding previously granted permission to bring in a power generator and mine surveying equipment to Cambodia, to show the court.

In addition, the court ordered customs officers at the Poi Pet checkpoint, bordering Thailand’s Sa Kaeo province, to examine the seized items to calculate custom duties to be levied for bringing the power generator and survey equipment into Cambodia.

Col Benchapol said he believed the court would consider fining the four and release them within two or three days.

The four are two couples, Saran and Suriya Panphet, both 43, Sa Kaeo natives and the mining contractors, and their assistants, Bai Sodachan and his wife, Wanwisa, both 24.

The four were detained while driving two pick-up trucks to survey a mine in Cambodian territory nine kilometres from the Thai-Cambodian border.

Meanwhile Sa Kaeo Governor Sanit Naksooksri said after attending the Thai-Cambodian Regional Border Committee (RBC) at Siem Reap that the Cambodian authorities assured him that they would coordinate with him in seeking the release of the detainees. He was optimistic that they would be freed as soon as the mining company confirms their employment.

The bus trip will begin on April 13 from Bangkok, crossing the border checkpoint at Aranyaprathet into Siem Reap.

The tour will include a visit to Angkor Wat and Tonle Sap. The meeting with Thaksin, and possibly Jakrapob, is to take place on April 14. The return trip is on April 15.

The tour package will include meals and accommodation at a four-star hotel.