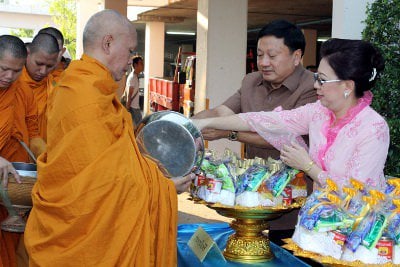 PHUKET: Phuket Governor Tri Augkaradacha this morning led an offering of alms to 81 monks before a mass blessing was held to honor HM Queen Sirikit’s 80th birthday today, which is also honored as Mother’s Day in Thailand.

The ceremony began at the auspicious time of 7:09am, with the Governor joined by his wife, Mrs Nalinee, as well as Phuket Vice Governors Sommai Prijasilpa and Chamroen Tipayapongtada, and Phuket City Mayor Somjai Suwansupana.

The assortment of high-ranking Phuket officials were bolstered by hundreds of well-wishers dressed in pink and blue, respectively the colors associated with HM King Bhumibol Adulyadej and HM Queen Sirikit.

After the mass blessing ceremony, Governor Tri and the entourage of officials made their way to Phuket Community Hall, where another blessing ceremony was held and where well-wishers signed a book of congratulations to Her Majesty.

As head of the Ministry of Interior’s Ladies Association in Phuket, Mrs Nalinee led representatives from other women’s organizations on the island in making a pledge to develop the nation to honor Her Majesty.