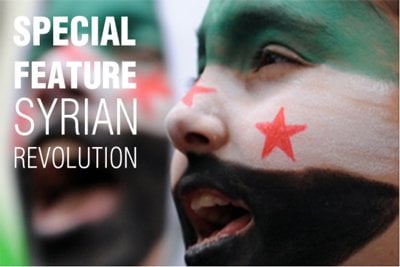 PHUKET: Two Syrian journalists were killed near Damascus on Saturday while covering the ongoing civil war, state-run media and an Arab satellite television station reported yesterday. And a crew member of a pro-government television station has gone missing.

Ali Abbas, head of the Internal News Department at the state-run Syrian Arab News Agency (SANA), was killed late Saturday evening when gunmen attacked his residence in the Jdeidet Artouz area near Damascus. The news agency blamed the attack on an “armed terrorist group”, the term it uses to describe all Syrian government opponents.

Abbas, who was 37, was buried in the port city of Latakia yesterday. His brother, identified as Captain Hussam Abbas, condemned the journalist’s death as “another desperate attempt to silence the free and resistant voice” of those who reveal the “false and misleading news broadcast by satellite channels.”

Also yesterday, the pan-Arab satellite television station Al Arabiya said 24-year-old Yusuf al-Bushi, an army defector who worked as a journalist for the station and several other international news organizations, was killed Saturday while covering a story in Al-Tal, on the outskirts of Damascus. The station said al-Bushi died when he was caught in a bombardment.

The deaths on Saturday came just a day after a crew member from the pro-government television station al-Ikhbariya was abducted in Al-Tal. The station said reporter Yarah Saleh, cameraman Abboud Tabarah, assistant Hatem Abu Yehiah, and driver Housam Imad were accompanying an army unit when they were abducted by an “armed terrorist group.”

“If it emerges that the journalists have been taken prisoner by an opposition group, the latter will be answerable for their safety,” Reporters Without Borders (RSF) said in a statement on Saturday. “We urge them to identify themselves and to show evidence that their captives are alive and in good health, and to release them immediately.”

According to the Committee to Protect Journalists (CPJ), at least 20 local and international journalists have been killed on duty in Syria since November 2011, making it by far the most dangerous place in the world for journalists. The organization believes at least fifteen of the deaths were work-related, but the deaths on Saturday have not yet been investigated by the agency.

The crisis in Syria began in March 2011 as a pro-democracy protest movement, similar to those across the Middle East and North Africa. The Syrian government violently cracked down on the protests, setting off an armed conflict between pro-Assad forces and anti-government forces.

The United Nations estimates that more than 10,000 people, mostly civilians, have been killed in Syria, and that tens of thousands have been displaced since the uprising against President al-Assad began nearly 18 months ago. The opposition believes the number of deaths has already surpassed 20,000.

PHUKET: The United Nations (UN) on Friday reported an increase in Syrian refugees, as the country continues to face heavy violence.

A spokesperson for the Office of the UN High Commissioner for Refugees (UNHCR), Adrian Edwards, spoke at a press conference, stating that the agency’s data shows a total population of 146,667 people in the refugee community.

However, Edwards added that in several countries, the agency has knowledge of substantial refugee populations who have not yet registered, as offices in Lebanon, Turkey, Jordan and Iraq have reported increases this week in the number of refugees from Syria.

According to the UN, an estimated 17,000 people, mostly civilians, have been killed since the uprising against President Bashar al-Assad began some 18 months ago in Syria.

The UNHCR said in Turkey, the refugee population now stands at 50,227, with more than 6,000 new arrivals recorded this week alone. Many of these are from Aleppo and surrounding villages, but others are from Idlib and Latakia.

While the main flow is into Turkey, around 8,000 people returned home voluntarily during July, mainly to villages in Syria’s Idlib area, the UNHCR noted.

On Monday, the Turkish government opened a new camp at Akcakale, a district in the country’s south-east. According to the refugee agency, it has also announced its intention to double its overall reception capacity from the current 50,000 people to 100,000 people, with the construction of as many as thirteen additional sites. Currently, refugees are hosted in nine camps, with women and children accounting for 72 percent of the population.

PHUKET: Unidentified gunmen dressed as high school students shot dead a well-known journalist in the Somali capital of Mogadishu yesterday, officials said. It raises the number of journalists killed in the line of duty so far this year to at least eight.

Yusuf Ali Osman, who was better known as Yusuf-Farey, was killed when unidentified men wearing high school uniforms shot him with pistols in the Dharkenley District of Mogadishu. Osman, who is a past director of Radio Mogadishu and currently worked as Media Relations Director for Somalia’s Information Ministry, was buried several hours later.

“We consider the assassination of Yusuf Ali Osman a big tragedy and we strongly condemn this unmitigated and senseless killing. It is a tragedy for the Somali media community,” said Somali Exiled Journalists Association (SEJASS) chairman Mohamed Osman Hussein. He said Osman was also a lecturer at the Somalia Journalist Club (SJC).

Hussein added: “It is painful and heartbreaking to lose a great journalist every month. The Somali government must demonstrate and carry out tireless investigations to identify the conspiracy behind these killings and bring to justice those responsible for this and previous crimes.”

“It is simply unacceptable that over the course of the year justice has not been served for any of the victims of these crimes,” said Augustine Mahiga, the United Nations (UN) Special Representative for Somalia.

Mahiga added: “This culture of impunity must end. We must not allow the fundamental freedoms that a free press represents to be compromised by those willing to use violence to serve their personal agendas. This is a decisive time in the political process and the work of media needs to be protected so that the Somali people are fully informed.”

Late last month, famed Somali comedian and media worker Abdi Jeylani Marshale was shot dead at his home in Mogadishu. It remains unknown who was responsible for the killing, but Marshale was well-known for making fun of the Somali militant group al-Shabab. The group had earlier threatened to kill him, forcing him to go into hiding in neighboring Somaliland for several days.

Al-Shabab is the militant wing of the Somali Council of Islamic Courts which took over most of southern Somalia in the second half of 2006. Despite efforts from the