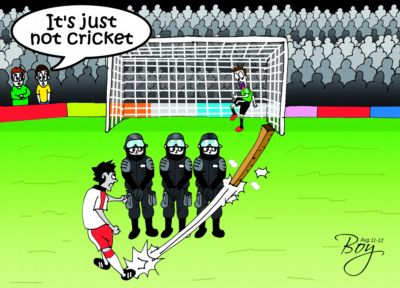 PHUKET: The recent threat of violence against Phuket FC fans who made the journey to Krabi Provincial Stadium should serve as a wake-up call to the Thai Premier League (TPL) to ensure that better security measures are in place for future matches in Krabi, especially those involving southern rivals.

The TPL has been an undisputed boon to Thai football since its inception three years ago, giving Thai players a great new opportunity to develop their talents against professional players from abroad – rather than having to market their own services on foreign soil.

Also benefiting have been the fans, who for the first time have a real chance to express provincial pride by cheering for their home teams – rather than having to glom onto some foreign team based seven time zones away, or worse, artificially fueling their excitement through gambling.

Here in Phuket, the local team has also given many expats a chance to meet and socialize with natives – not so easy on an island where migrants far outnumber the locally born-and-bred. In addition, the matches also help to attract domestic tourists throughout the year, including the low season when occupancy rates turn south.

Sadly, Phuket FC’s promotion to Division One was accompanied by a rise in loutish behavior at Surakul Stadium – most notably the blockade of referees from leaving the stadium following a disappointing loss last season.

Fortunately, the situation has improved considerably, thanks in large part to the TPL’s issuance of fines. Hopefully, the Krabi FC management will take steps to prevent a repeat of last weekend’s debacle; they will have every incentive to do so after a 60,000-baht fine and a complete ban on any fans attending their next home match.

It remains a mystery why “the beautiful game” seems to produce so much ugly behavior among the fans. Notwithstanding, it has to be the responsibility of each club’s management to organize sufficient security at matches – including protectuin for the supporters of visiting sides.

TPL club owners should study the well-documented steps taken by their circa-1980 counterparts in the UK, who were successful in stamping out a rash of violent behavior at matches during that era.

Thanks to the political climate in recent years, Thailand has perhaps already eclipsed South Korea as the country most often associated with mob action and street riots. The last thing we need now, as we enter what appears to be a period of relative political stability, is to allow sports stadiums to become outlets for this type of behavior.

Whether it be politics or sports, much of Thai society still has a long way to go in learning to respect the rules – and accepting the results with dignity. There is no point to adding loss of face to the loss of a game.